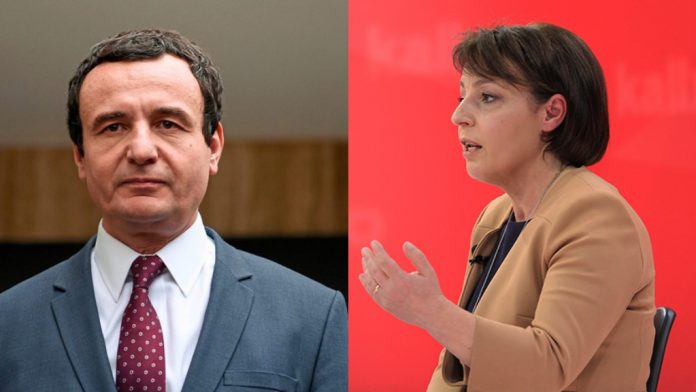 The Prime Minister of Kosovo, Albin Kurti said that he has started a campaign against his deputy, also Minister of Foreign Affairs, Donika Gërvalla, as if she does not respect the Kosovo Liberation Army.

Kurti says that this campaign started exactly at the time when Gërvalla returned from a successful visit to Brussels, Telegrafi reports.

“Yesterday, it seems that a campaign started against my deputy and the Minister of Foreign Affairs, Mrs. Donika Gërvalla, with the thesis that she does not respect the KLA.

It is interesting that this campaign did not start when Mrs. Gërvalla came to our electoral list or when she was appointed Minister, but now that she has returned from a successful visit to Brussels “, says Kurti.

Further, the Prime Minister emphasizes that Gërvalla in meetings with internationals has explained the crimes of Serbia, like few others.

“Mrs. Gërvalla defends and affirms our liberation war and the KLA.

“In meetings with internationals, she explains the agitation and crimes of Serbia during the war in Kosovo like no other,” says Kurti.

Recently, some previous statements of Donika Gërvalle for the Special have returned to the media, where she said that she will cooperate with Specials for crime in Kosovo.

After numerous reactions, Minister Gërvalla through a post on Facebook said that she will not stop seeking justice for all victims in Kosovo, regardless of political affiliation, gender, nationality or function of victims and perpetrators. kr.imit.

Otherwise, the publication of these statements has provoked debate in the country, where the opposition party PDK has demanded the resignation of the minister. / Telegraphy /

Haxhiu: MoH should guarantee citizens who will receive the second dose of “Pfizer” after 21 days – Latest News

Indiscriminate distribution of cash is an inefficient and costly measure