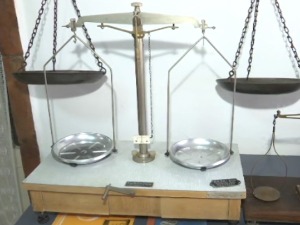 The first scales were created in Mesopotamia seven thousand years ago, and were similar to the one constructed by Miloš Stojanov from Zrenjanin.

The isosceles scales that were designed then and today are the most reliable no matter what weight they are intended for, says this collector.

“This type of scale has remained eternal and I think that for many, many years to come, this type of scale will remain. An isosceles weight of 20 kilos, she felt 500 milligrams. Put it on her senses “, says collector Miloš Stojanov.

The oldest scale in this collection is the American “Daytona” from the 1920s. The development of trade scales in the last hundred years starts from it.

Among the numerous scales with a classic look, there is one unusual, so-called German pendulum scale that was used in pharmacy.

Milos also collected a collection of weights, without which scales cannot measure. There is also a special scale that is used for calibration and tare weights.

“They are compared with trade weights and then they are harmonized with those weights. Each tag has its own specific error. Each weight must be stamped next to the scale “, adds Miloš.

Unfortunately, the collection cannot be seen by a large number of citizens. One way to do that is to be part of the museum collection.

In order for the National Museum in Zrenjanin to eventually process a collection, it is necessary for the curator to look at its value from several angles.

“When he is offered a certain item, he assesses based on whether such an item already exists in the collection. Whether it is something that completes the collection itself, the condition of the object is important. Does it have native value, because we are a museum of central Banat “, explains Sanja Vrzić from the National Museum in Zrenjanin.

The collection includes 85 correct scales and scales. Miloš Stojanov spent his entire working life as a master for scales, collecting broken ones, and then repairing them all as a pensioner.