The online newspaper “Insporti” has provided the Top Confidential report written by the former secretary of the Football Federation of Kosovo, Eroll Salihu about the scandals produced by the president of FFK, Agim Ademi. In this report written by Eroll Salihu, in June of this year, are all the autocratic actions of Agim Ademi, who according to him since his arrival at the helm of FFK, this institution has been damaged.

The editorial office provided this “Top Confidential” report written by Eroll Salihu, which was dedicated to the Executive Committee of FFK and the chairman, Agim Ademi. This report discusses all the problems within the Football Federation of Kosovo, behind which, according to Eroll Salihu, stands Agim Ademi and his group. The report tells of Adem’s scenario of how to reward his collaborators who gave him power over the administration.

In addition to problems with justice, Ademi has promised many things to a club president from Gjilan. This document does not mention which club it is, FC Drita or SC Gjilan. The reason that former secretary Salihu wrote it as a kind of threat to President Ademi, in order not to fire him. This report was written after the decision of the Executive Committee and Agim Ademi to dismiss him. There was even a quarrel and talk between them in the offices of FFK. Various local media reported on a physical fight between them in June. Salihu has been replaced by Taulant Hodaj, who now holds the position of General Secretary of FFK. Meanwhile, Salihu’s new position is legal advisor.

This report has a total of six pages. Pages I and II show the onset of problems within the Kosovo Football Federation. 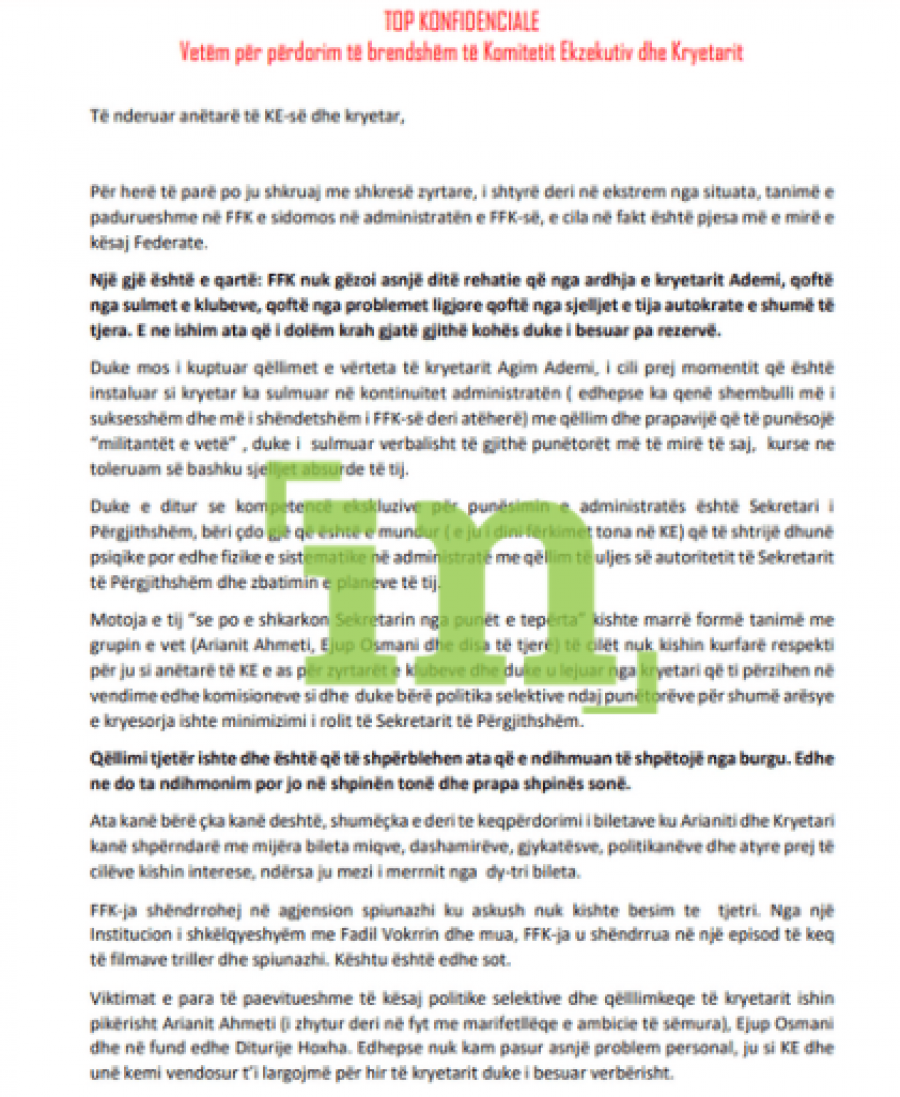 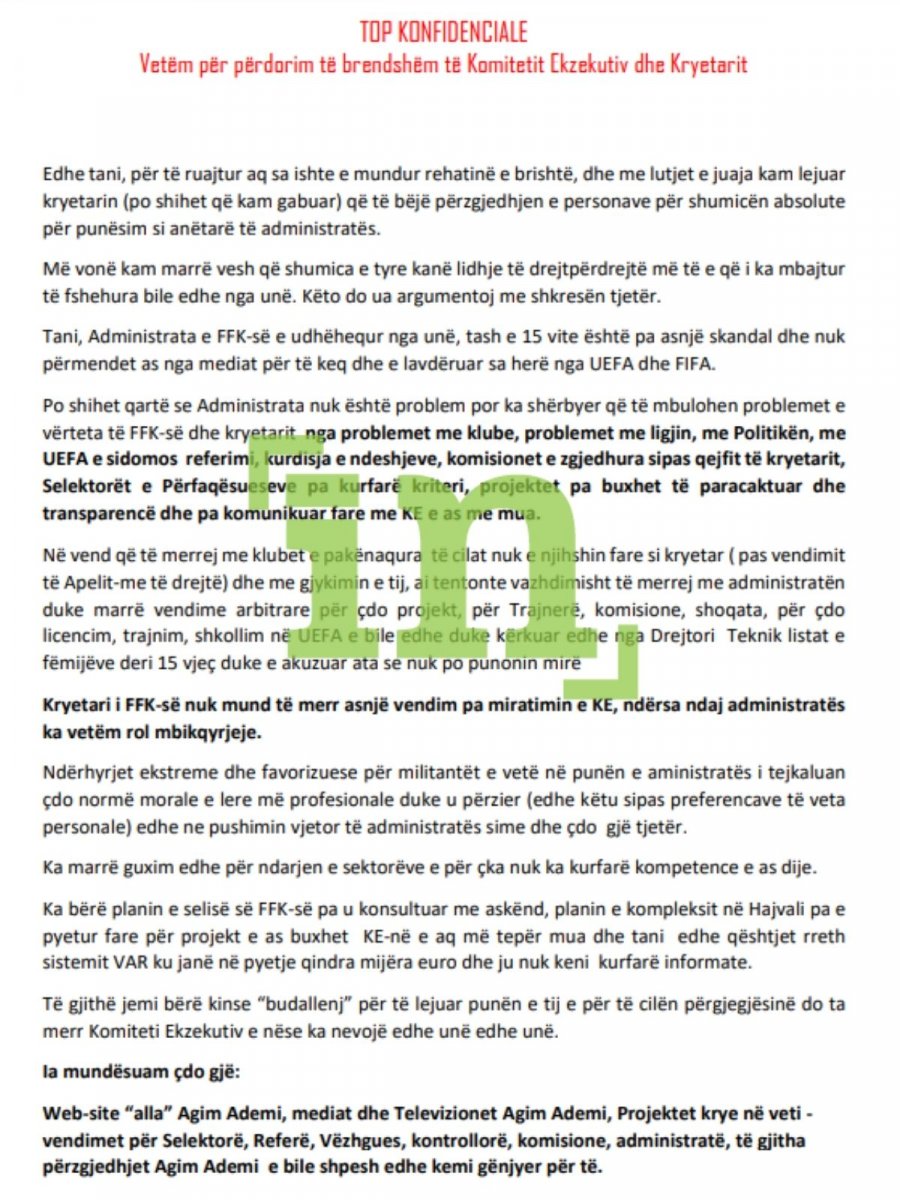 Former Secretary General of FFK, in these two pages he reveals how he started the attacks of Agim Ademi against the administration that he has been leading for 15 years now. The transformation of FFK into an “espionage agency” and how there was no comfort in FFK since the appointment of Adem as its chairman, the misuse of match tickets of the Kosovo Representative. Arianit Ahemti and Agim Ademi have distributed thousands of tickets to friends, lovers, judges, politicians and those who were interested. However, the first victims of Adem, according to this report are Arianit Ahemit and Ejup Osmani. 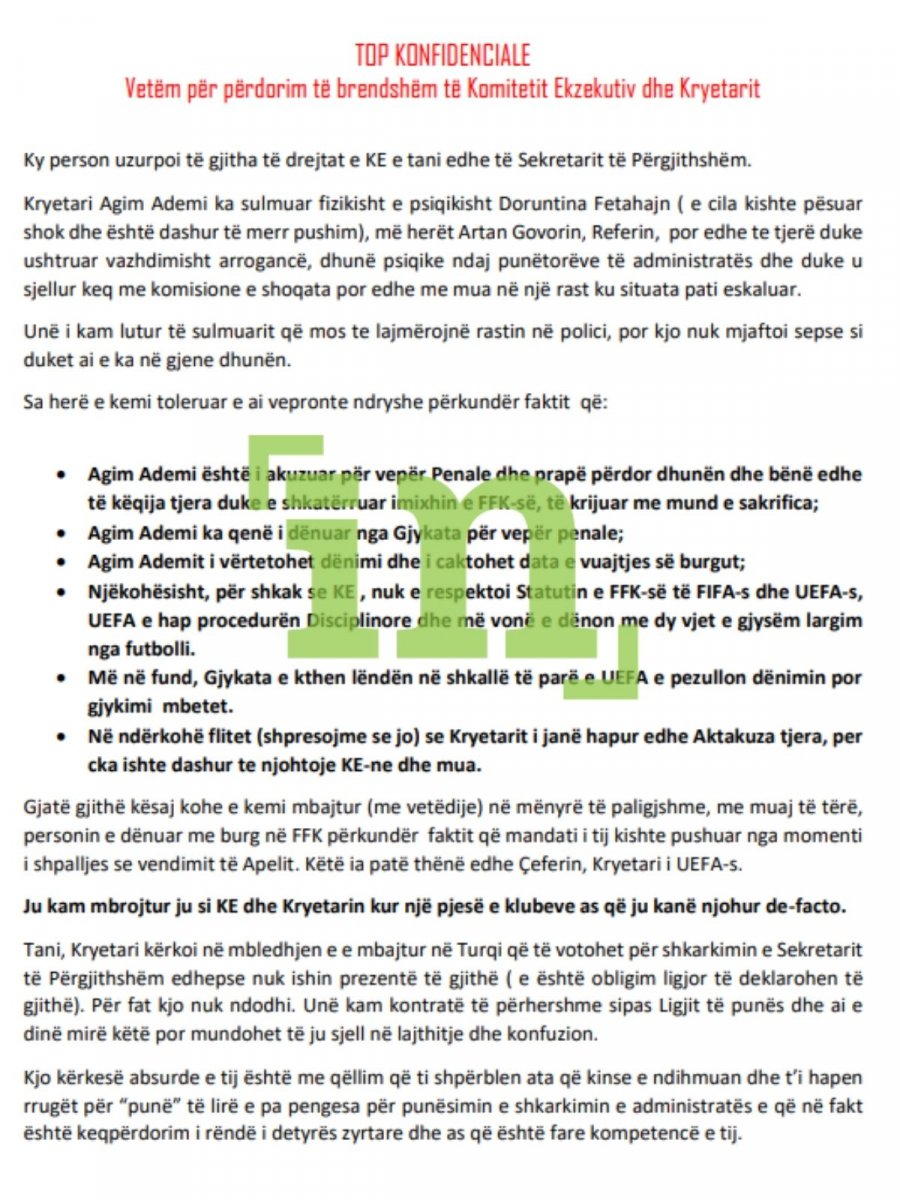 “The first inevitable victims of this selective policy and bad intention of the mayor were exactly Arianit Ahmeti (drowned up to the throat with sick tricks and ambitions), Ejup Osmani and finally Diturije Hoxha”, it is said at the bottom of page I. Whereas, at the end of page II (two), it is understood the work and the attempt that his group have made to manipulate the public.

According to Salihu, sites (portals) “alla” Agim Ademi and televisions have been created, and he explains that they have been forced to lie in his name. 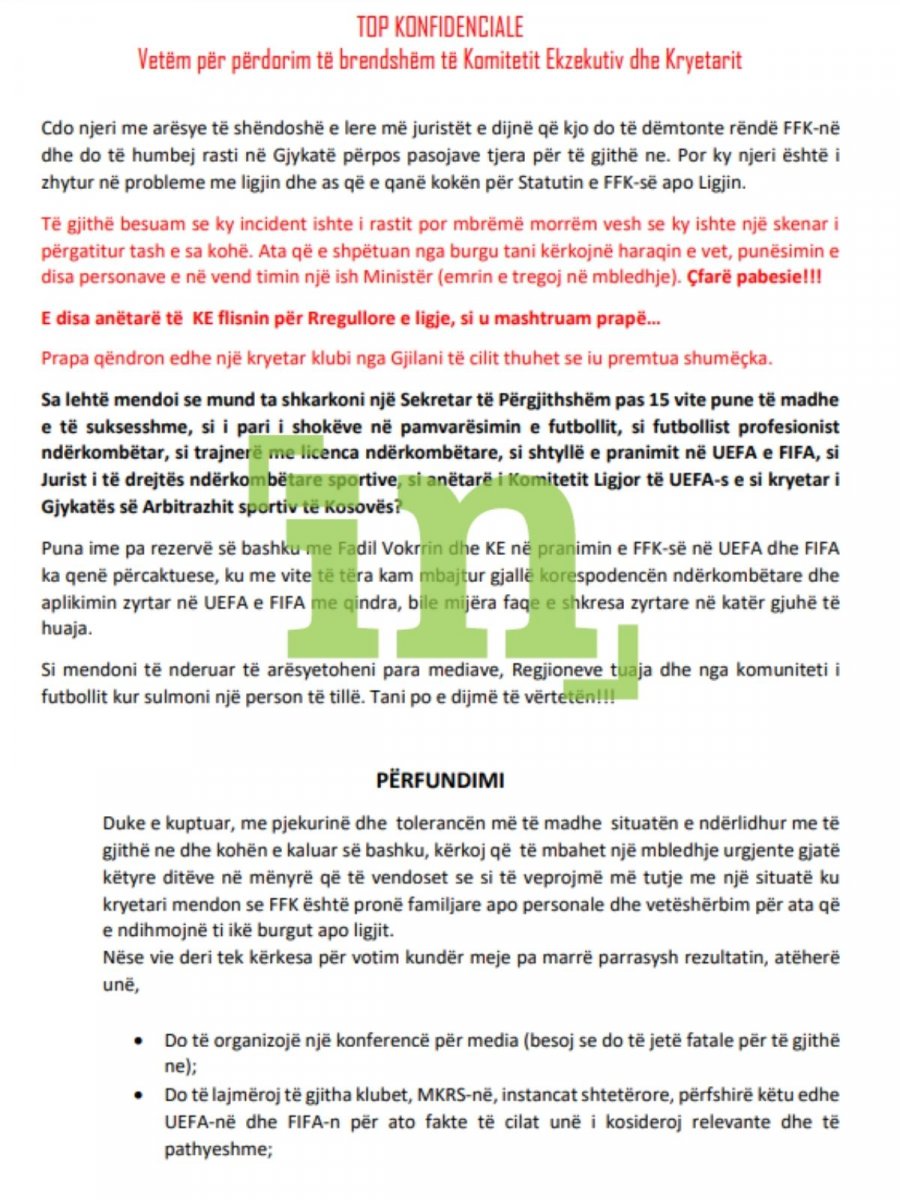 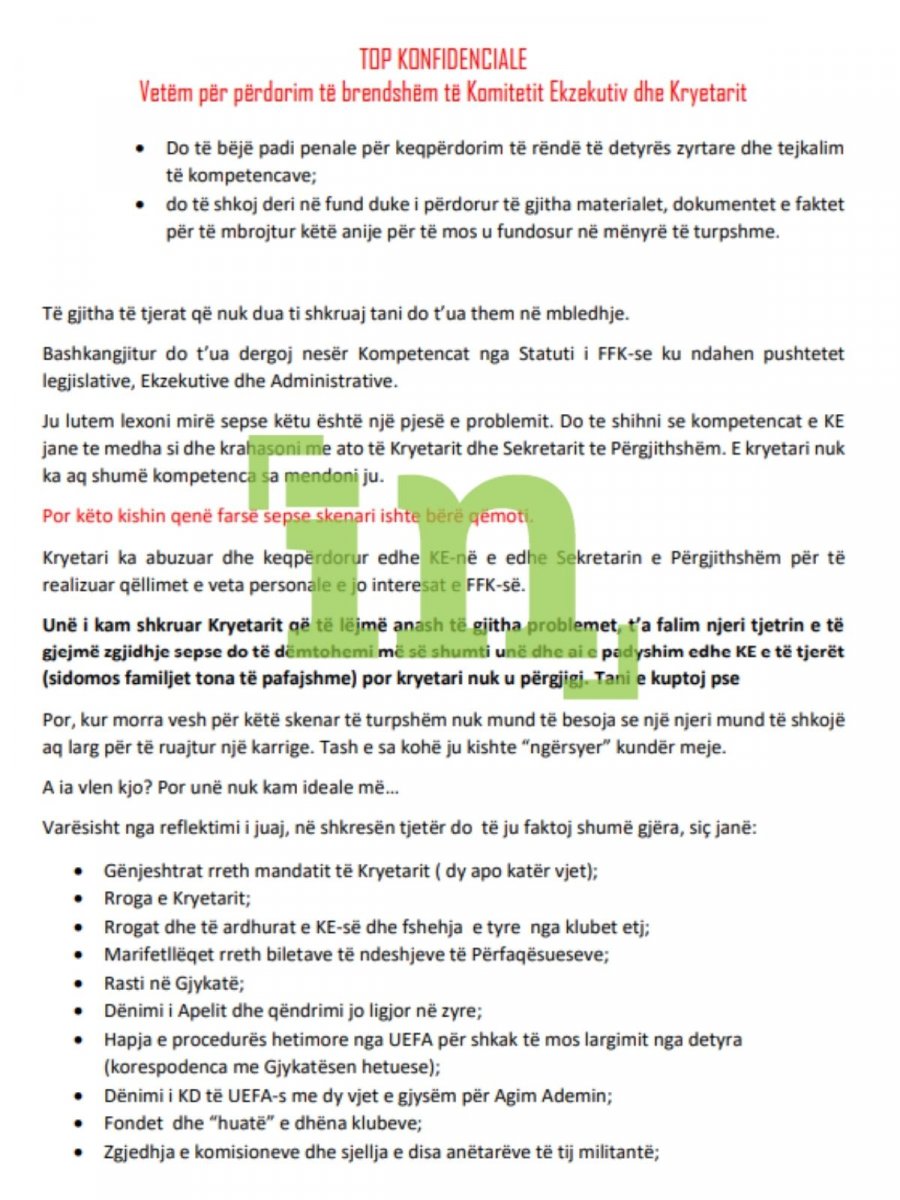 On page III (three), Salihu mentioned a serious event that happened inside FFK. According to what is written in the report, Ademi physically attacked Doruntina Fetahaj. The latter was forced to take medical leave due to poor health. The beating of Judge Artan Govori by Agim Ademi was also mentioned.

“I begged the attackers not to report the case to the police, but that was not enough because he apparently has the violence in his genes” – one of the sentences on page III. On page IV (four), Salihu wrote about Agim Ademi’s script to dismiss him from the position of General Secretary, which he has already done. In the position of Eroll Salihu, is Taulant Hodaj, who is also the lawyer of the president of FFK. A very interesting and important detail is in the scenario for his overthrow, there is also talk of a former minister. All these actions, according to Salihu, were done to reward those who are helping them to avoid imprisonment.

In addition to problems with justice, Ademi has promised many things to a club president from Gjilan. This document does not mention which club it is, FC Drita or SC Gjilan. 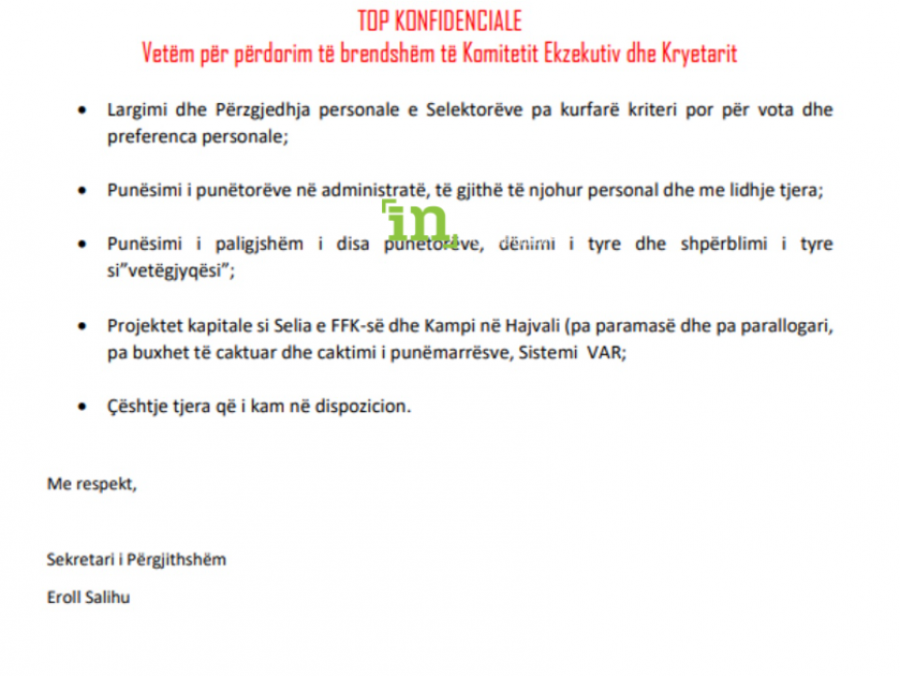 On page V (fifth), are all the violations committed by Agim Ademi as president of the Football Federation of Kosovo. Also, Salihu says that he tried to reach an agreement with Adem because if these problems are published then the consequences will be great for both.

Salihu on page IV (six), has documented all the violations committed by Ademi.

Lies about the term of the Chairman (two or four years);
Mayor’s salary;
EC salaries and income and their concealment by clubs, etc .; Tricks about the tickets of the Representatives’ matches;
Case in Court; Conviction of Appeal and illegal stay in office;
Opening of the investigation procedure by UEFA due to non-removal from office (correspondence with the Investigating Judge);
UEFA SC sentences Agim Ademi to two and a half years;
Funds and “loans” given to clubs;
Election of commissions and conduct of some of its militant members;

At the end of the report, respectively on the last page, VI, are mentioned the appointment and change of the selectors of the Representative according to the personal desire of Adem, so he has decided for everyone without any criteria. Illegal employment in FFK of some workers, their punishment and their reward as “self-judgment”. Salihu has also made accusations about FFK capital projects. (Capital projects such as FFK Headquarters and Camp in Hajvalia (without pre-measurement and without pre-calculation, without fixed budget and appointment of employees, VAR system). This report was written on June 13, 2021.

The two neighborhoods of Prishtina that today will not have water