Escaping from an Israeli jail, Palestinians went by means of a gap underneath the sink 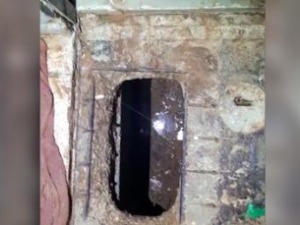 Six prisoners, including members of the Islamic Jihad organization, shared a cell in Gilboa prison, according to the Guardian.

Although it was originally thought that they dug a tunnel, the commissioner of the Israeli prison service, Katy Perry, said that the fugitives took advantage of a mistake in the structure of the prison and discovered a gap under the floor.

“According to our first research, it seems that there was no digging, but the plate that covered the hole was just lifted,” Peri said.

Omer Barlev, the Israeli Minister of Public Security, said that the men may have already arrived in the West Bank after the escape was discovered on Monday, at three in the morning.

“The planning was very precise, very detailed, so there was probably outside help. We are currently investigating that. We will catch the fugitives,” Barlev said.

The photos published after the escape show a narrow passage in the floor under the sink, and the fugitives reached the drainage system of the prison through that passage.

Officials have lifted roadblocks and are patrolling the prison area. In order to prevent further escape attempts, the other 400 prisoners were transferred.