Fili does not even assist catchers, Bogdanović solved the drama for the Atlanta break! 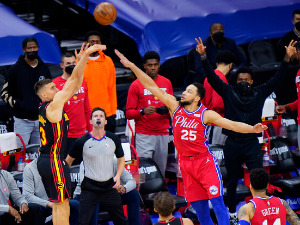 In a match in which two different halves were seen, drama at the end and complete chaos on the floor, the hero was a member of the Serbian national team who hit an extremely important three in the last minute, and then the last free throws for the final result.

The host was not helped by the star of American wrestling, the popular catcher “Triple H”, who together with Joel Embid announced the game by ringing the bell with his recognizable mace.

However, such an intro did not have much of an impact on the visiting players, who came out on the floor in a good mood and took control thanks to Bogdan Bogdanović, who hit two quick three-pointers.

The Hawks shot exceptionally at the beginning of the match, on the other side Joel Embid tried to parry the trench, but when the lost balls started to multiply in the middle of the first section (as many as nine errors), the difference started to grow. Then Tre Young “ignited” and started the series 17: 0 of his team and the maximum was +26 quickly.

The hosts did not want to surrender and strengthened in defense, but the “hawks” were fantastically served by a shot from a distance.

Young hit several long-range threes through the helpless Danny Green, left at halftime with as many as 25 points, but the Seventy-Sixers reduced the difference until they went on vacation.

As expected, the beginning of the third quarter belonged to the team of Doc Rivers, who were extremely aggressive in defense, forcing their opponents to take hard shots, but they were not punished on the other side. Bogdanovic missed the top three only in the middle of that period, and Atlanta managed to repel the Philadelphia raid.

HORROR IN SUBOTICA! THE CAR HUNTED THE TRAFFIC LIGHT! Injured…

REMOVED FROM FORGETTING! Ethno home in Veliki Izvor left in…

Novi was followed somewhat later by the first team of the East in the last 12 minutes with a more or less acceptable lag (99:83).

That was the introduction to a great drama in the end, since Atlanta completely lost its temper, started with misses, so Bogdanović couldn’t throw in anything either.

Slowly, the advantage melted away, Seth Curry poured threes in his brother’s style, and Embid made the Seventisixers come to the possession of the backlog.

However, then Bogdan entered the stage – despite the fact that he missed several previous shots, he took a new three-pointer and silenced the whole hall, raising it to 121: 116 for 40 seconds until the end.

He could have been a tragedian because he lost the ball in the end, but he corrected himself and hit both penalties for the final 128: 124 and the Atlanta break.

In the end, the match ended with 21 points (7/17 from the game, 5/12 for three), with four rebounds, five assists and one stolen ball. The most efficient was the mentioned Young with 35 points (26 in the first half) and 10 successful passes.

Collins also had 21 points, Kevin Erter added 15, while Embid dominated on the other side.

The Senegalese stood at 39 points and nine rebounds, Curry at 21, Tobias Harris helped with 20, while Ben Simons, who worked much more in defense, scored 17 points.

The second game in the series is scheduled for Tuesday, also in Philadelphia.

Faik Fazliu’s wife tells how the incident happened: Police knocked him to the ground

Zogaj: The economic program of the Kurti government is just words, without concrete measures and figures – Latest News

REMOVED FROM FORGETTING! Ethno home in Veliki Izvor left in bequest to the locals…

What has been anticipated for hundreds of years has not too long ago been found:…