First time with my aunt in Lika 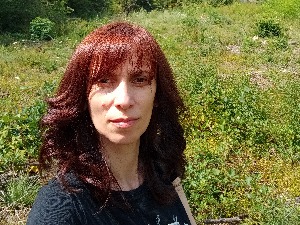 This year, all the dice fell into place and at the end of July we set off on our long-planned “return” to our homeland. We decided to bring her fifteen-year-old son, who grew up hearing stories about Lica, but had never seen her. Everyone to whom we told that we would spend those three days visiting cemeteries, deserted villages and weedy yards where we used to play as little girls looked at us rather surprised. They were even more surprised that we were taking a teenager on such a trip and that he even agreed to go with us.

Neither we nor he paid attention to those comments. We decided, found accommodation in Gospić and set off.

I was surprised by the full bus that left Belgrade station for Knin and Šibenik that evening. As usual when I travel, I looked at the people around me and tried to “figure out” who they are, why they are traveling, whether they are happy, sad, curious. I quickly made a “split”. There were a few who simply traveled to the sea, relaxed and ready to fall asleep as soon as the lights on the bus went out. However, most of them had a gleam in their eyes like ours. It was clear that they were also traveling to their homeland. We differed only in the amount of trepidation, impatience and curiosity that spoke clearly of how many times each of us had traveled this road.

Highway, border, night drive through Slavonia, Banija and Kordun and finally, at dawn, Lika! We stop at the pump near Plitvice Lakes, tired but happy. I breathe in the well-known air, a smell that nothing, not even the past 30 years, could erase from my being. I tell my sister to take a deep breath because it was the first time he and Lika met. He looks at me a little confused, but smiles and nods.

A little later, at Udbina, we change into a van and head for Gospić. It’s cold, we pulled out socks and jackets from the bag, which seemed completely irrational last night, at 35 in Belgrade. My sister and I are commenting aloud – that’s how it is in Lika! With laughter, we count the potholes over which the driver drives us rather harshly, but safely, through the desolate and dark Serbian villages. We leave behind a few people who traveled with us. You can see that they are going home or to their relatives. In the end, only the three of us remain. The driver is quite surprised to learn that we are going to a haunted apartment, and we are also overwhelmed by some indescribable sadness. The truth that we have been living with for years “broke” painfully and completely exposed in front of us. We are foreigners, tourists, in our hometown, in our Face!

And exactly the opposite of what could be expected at such a moment, we decided to “heal” the bitterness of that knowledge by touching an even bigger wound. After a short rest, we set off for Divosel, my father’s native village. The first “station” – the cemetery, because there are no living people in Divosel!

Thanks to the action that I, with a couple of relatives and friends, organized last year and this year, we reach one of the six savage cemeteries quite easily. There is our entire family from our father’s side, our blood, our ancestors, our uncelebrated glories, births, baptisms. We light candles, remain silent… We visit and take photos of other monuments, read aloud famous surnames. It’s both sad and beautiful! We broke the heavy savage silence, brought light to this sad, lonely place. And while dark clouds are rolling over the nearby Velebit and the fog is slowly rising from last night’s rain, I know that these souls are happy for us. It’s as if they are talking to us with their children’s hands, girlish braids and elderly eyes. It’s as if they’re asking us if we know anything about those left behind…that they’re gone, if they’ve forgotten them. They ask us if there is anything in Divosel apart from heaven, earth and blood. Eh…

“There is almost no monument on which 1941 is not written as the year of death of at least someone,” my sister’s sentence jolted me. Everything fits into her!!! The death sentence for Divosel was written that very year, with the blood of innocent children, youth who did not get to live, youth stopped by the springs of Velebit and its bottomless pits. What started in 1941 was finished in 1993.

We were looking for Divoselo that strange day among the ruins from which trees grow, along overgrown roads, in our deserted yard, which we recognized by the gnarled trees of two old apple trees. We searched and found… heaven, earth and blood! We also found that missing, hidden part of ourselves!

That’s exactly what we found the next day, on the ruins of my mother’s birth house in the nearby village of Vrepac. My sister and I recognized the yard where we played, the house where we grew up, looked for fragments of life among the collapsed walls, under dilapidated wooden beams that had long since given way under the weight of Lika’s snows.

We found a glass, a saucer from a coffee cup, a tin box for sugar. God, how much sadness and happiness were packed into those few little things that we later carefully packed into the suitcase. We described to her son what the house, the barn, the yard looked like. They explained to him the purpose of the large wooden tub that our grandfather made a long time ago and that still defiantly sticks out from the basement. We told him about the beautiful horses with stars on their foreheads and the polenta that no one made as well as our grandmother. He listened, looked, thought, without many words and questions. For a moment I wondered if we really overdid it. Is this really the way to take a fifteen-year-old boy?!

We could take him to the sea, which is only fifty kilometers away from this wasteland of ours in Lika. We could have visited the Plitvice Lakes, Velebit, we could have shown him the beauty that Lika is full of, but we didn’t.

We wanted to show him the truth, harsh, painful and ours!

Although we confused him, surprised him, saddened him, maybe at times scared him, I believe he understood why we took him on this unusual trip.

I believe that he also found a part of himself in the desolate Divosel, in that cemetery that looks up to the sky, among the ruins of my grandmother’s house in Vrepac, on the streets of Gospić where we walked as strangers.
And I hope that this is just the beginning, that Lika is no longer just a concept and a nostalgic family theme for him, but desire, joy and hope. I hope that, despite the trouble he saw, we awakened in him that grain of love that always brings you home!!!