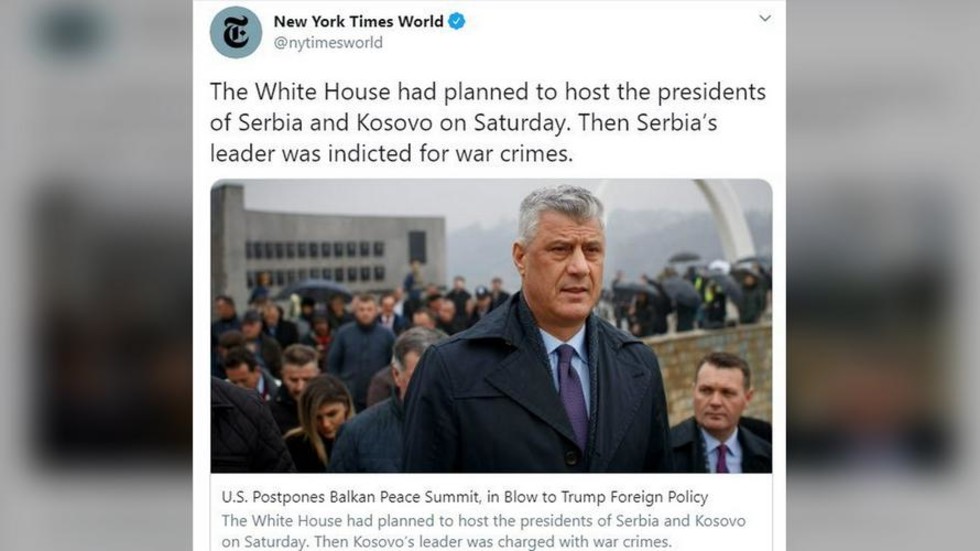 A Balkans meeting scheduled in Washington was canceled after Kosovo’s Hashim Thaci was charged with war crimes. But someone from the New York Times apparently thought the Serb had to be the standard villain in every story.

“The White House planned to receive the presidents of Serbia and Kosovo on Saturday. Then the leader of Kosovo was charged with war crimes, ”begins the story of the Gray Lady at the failed summit.

But when it was shared on NYT’s Twitter account, the premise mysteriously turned to say it was the Serbian leader who had been charged. Subsequent tweets detailed the accused party, while the erroneous one, which some readers found amusing, was deleted.

Thaci canceled his trip to Washington after he was indicted by the SPO (Specialist Prosecutor’s Office) in The Hague among other Kosovar Albanian personalities. The politician who acts as the president of the self-proclaimed unit is charged with war crimes committed by the Kosovo Liberation Army, the insurgent group that fought against the Serbian government and won thanks to the 1999 NATO bombing campaign. Thaci is a co-founder of the militia.

Also on rt.com
The “President” of Kosovo cancels the US trip after being charged with war crimes, but Trump-sponsored talks are ongoing

The NATO attack on Serbia has been described by the Bill Clinton administration as a morally justified “humanitarian intervention” necessary to rescue civilians. This narrative was wholeheartedly endorsed by the US media and spawned a long line of Serbian villains in western entertainment.

The actual disintegration of Yugoslavia in the 1990s was a protracted and bloody ethnic conflict in which criminals and victims were found on all sides. Serbs have long complained that the crimes of their opponents were subsequently whitewashed.