Glamor and kitsch mixtures of celebrities on the pink carpet in 2022. 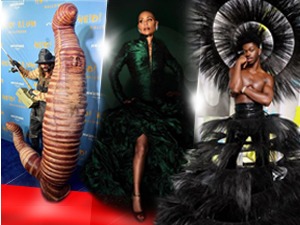 As every year, the outfits of celebrities from the world of film, music and entertainment, who paraded the red carpet on different occasions, were the topic of the media in 2022 as well. There were classic, modern, and experimental creations, as well as retro reviews.

Kim Kardashian closed the fashion show on the red carpet one of the biggest fashion events in the world – the Met Gala – in the dress of Marilyn Monroe, in which the legendary actress to President John F. Sixty years ago, she sang a birthday greeting to Kennedy in a sweet voice.

In order to be able to wear the dress designed by Jean Louis for Marilyn Monroe, Kim Kardashian had to lose seven kilograms. However, it seems that despite all the precautions, the dress suffered damage.

On the other hand, at times it seemed that some had an “anything goes” fashion approach to walking the red carpet – from a linen suit with a skirta combination in which Hollywood seducer Brad Pitt walked.

Julia Roberts, on the other hand, in order to recognize her colleague and friend, George Clooney, at the Kennedy Center Awards a dress covered in framed photos of Clooney.

Of course, we shouldn’t forget the worm costume either worn by Heidi Klum for Halloween and thus once again managed to surpass her original creations that she chooses especially for this occasion.

Zoe Kravitz, who plays Selina Kyle in the movie Catwoman, appeared at the premiere of the film in New York in a black plush dress with a cat’s head on the neckline. The dress was designed by Oscar de la Renta.

Another creation that shone at the Met Gala was the dress of Blake Lively, who was one of the hosts of the evening, along with her husband Ryan Reynolds. Her sparkling dress, where a large bow transformed into a baby blue train, was inspired by the Statue of Liberty, the Empire State Building and the blue ceiling of Grand Central Station, and came from Atelier Versace.

Emma Corinne took the “JV Anderson” combination to the BFI Film Festival in London. The actress, who portrayed Lady Di in the Netflix drama The Crown, walked the red carpet in a glittering silver ball gown with a goldfish swimming in it.

The most eye-catching outfit of the night at the 2022 Oscars, according to designers, was the dress worn by Jada Pickett Smith.

She left an impression on everyone present, primarily with her appearance, but also with an emerald dress with ruffles that arrived from the creative team of Jean Paul Gaultier, as a sign of support for her husband Will Smith and his work on the film King Richard.

Actor Timothee Chalamet walked the red carpet in a backless red suit at the promotion of the film Call Me by Your Name at the Venice Film Festival. The suit was designed by Haider Ackermann, a French designer and close friend of the actor.

At the Cannes Film Festival in May, Anne Hathaway reminded us all of her Genoese royal roots in the 2000 Princess Diaries franchise. The actress looked ravishing and sensual on the red carpet in an all-white Armani gown, accessorized with spectacular sapphire jewelry.

Rapper Lil Nas X redefined menswear thanks to designer Harris Reid, drawing attention to his look at the MTV Video Music Awards. For the occasion, the rapper wore an elegant black ensemble with a circular halo around his head in several concentric circles made of feathers.

His skirt was also decorated with feathers, and the rapper wore black leather pants underneath.

And at the end of the year, one outfit attracted the attention of not only the domestic, but also the world public. Nikola Jokić, who appeared at the press conference in a checkered suit, caused excellent reactions, he even received praise from Charles Barkley, who was delighted with the Serbian basketball player’s style.