Gold for Jovana Preković on the Premier League in Istanbul 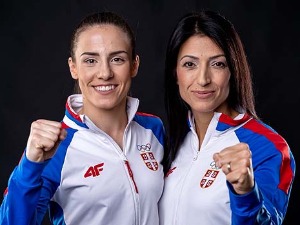 This is the first competition organized by the World Karate Federation after a year, and the performance in Istanbul was a huge challenge for Jovana, who won participation in the finals of the Premier League with four victories.

Jovana Preković won the gold medal with victories over the competitors from Slovakia, Sušakov Ingrida, in the second round she was better than the competitor from Switzerland, Kornfeld Noeme.

After this match, in the third round, she defeated the national team member from Croatia, Lenard Ana, and in the semifinal match, she defeated the competitor from Iran, Alesadi Shima, whom Jovana defeated with a very convincing result of 6: 3.

“I am sorry that I did not fight today, because after a year without real competitions, every fight at a high level means a lot to me. Regardless of the fact that Rozita is my direct competitor for winning the norm for participation in the Olympic Games, I am sincerely sorry that she was injured and I wish her a quick and successful recovery. “Said Jovana Preković, a member of the Ministry of Defense and the Armed Forces of Serbia. “Knjaz” from Arandjelovac.

“What to do, let’s move on, we were looking forward to today’s match because we need as many matches as possible with top fighters. We understand this competition as one of the steps that will take us to our dream, and that is the Olympic Games in Tokyo. The injury of the Iranian woman prevented us from measuring our strength once again, but I believe there will be another opportunity for that because I sincerely hope that the injury that Rozita received is not severe and that her team did not want to risk that injury being even more serious today. We continue our preparations in Arandjelovac with top competitors from Brazil, Greece, Bulgaria, Finland. Today, the participant of our camp in Arandjelovac, the Brazilian Kumizaki, also won a gold medal in Istanbul, but in the category up to 55 kg, while the Bulgarian Ivet Goranova lost in the fight for the bronze medal. Which speaks of the quality of karate women who currently live and train in our hometown of Arandjelovac. In the end, I would like to thank once again the Government of the Republic of Serbia, the Ministry of Youth and Sports, the Olympic Committee of Serbia, the company “Peštan”, the Municipality of Arandjelovac and the Karate Federation of Serbia for enabling us to bring peace to Arandjelovac for preparations and progress. “said Roksanda Atanas’ coach Jovana Preković.

Malisheva and Dukagjini get maximum points, results of eight meetings in the First League – Latest News