He did a silly factor, he diverted consideration from Argentina’s success 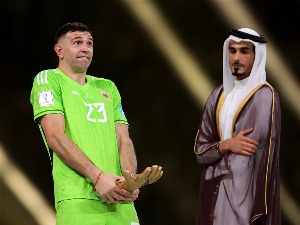 At the press conference, Vieira pointed out that the actions and behavior of Argentina goalkeeper Emiliano Martinez were bad for Argentina.

“What Argentina’s goalkeeper did diverted attention from what Argentina did at the World Cup. They didn’t need it, but sometimes you can’t control people and their decisions. Martinez did something stupid,” said the former French national team player.

Emiliano Martinez had a few excesses in Doha after the final in which Argentina beat France on penalties. He put the trophy for the best goalkeeper on his crotch, while he was still on the podium, and in the dressing room, during the celebration, he asked for a minute of silence for rival striker Kylian Mbappe.