Heavy rains in Montenegro, there may be worry of Bistrica and Lim overflowing 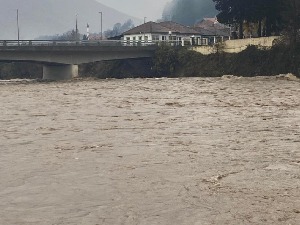 The president of the municipality of Berane, Vuko Todorović, said, at the meeting of the Municipal Team for Protection and Rescue, that there is a fear of swollen Bistrica and Lim rivers and their overflowing.

The Municipal Team for Protection and Rescue met urgently in Berane due to heavy rainfall and possible bad weather.

At the meeting, a decision was made to visit all endangered places and take the necessary measures due to natural disasters caused by heavy rainfall in the area of ​​the Municipality of Berana, which can cause landslides, landslides, devastation of road infrastructure and endangering residential buildings in a number of local communities.

The most critical at Mrs. Rijeka Bistrica’s place is passing through the township of Buce, and at her place of enjoyment in Lim.

The fact that the water level in Lima is high is best seen near the city bridge and the Berane hotel.

Some residents of the Donji Talum settlement report that groundwater threatens their households.

Heavy rains caused problems in Kolašin as well, and in the village of Lugovi, near the main road Kolašin – Crkvine, a bridge collapsed.

Heavy rainfall in the Podgorica area caused an increase in the water level at the source of Mareza. The water level of the Morača river reached almost eleven meters this morning.

Heavy rainfall caused i landslide in the town of Mili not far from the Gostun border crossing. The landslide closed the entrance to the tunnel and traffic on that part of the main road was interrupted for several hours.