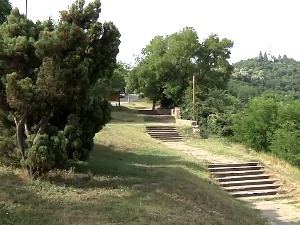 That the Hisar hill should be one of the main tourist assets of Prokuplje is best shown by the fact that every host, when showing the town to a guest, first brings him to this place.

For this hill, the name Hisar has been in use since the end of the 19th century, and archaeological research is still revealing various objects that take us back to the second half of the 5th century.

“Depending on the possibility of financing further reconstruction and conservation of the discovered objects, in agreement with the city of Prokuplje, I believe that the best possible way will be found to put the discovered objects into a tourist function,” says Sanja Crnobrnja Krasić, an archaeologist at the National Museum of Toplice.

“From the foot to the top, we come across the Latin church, Jug Bogdanova or the water tower by the river Toplica, monuments to the artists Rade Drainac and Boži Ilić, the monument to Dr. Aleksa Savić, and at the top a restored medieval fortification,” says Simon Simonović, director of TO Prokuplje.

A new asphalt road from the base to the top, about one and a half kilometers in length, was built and illuminated with lighting, for which four million dinars were spent.

With the improvement of the infrastructure, numerous cultural and historical contents, a magnificent view of the city, the river Toplica and the natural phenomenon epigenia, there are enough reasons for the Hisar hill to occupy a significant place in the tourist offer of the Toplica district.