If you’re occurring a visit, ensure you undergo from kinetosis – a journey illness 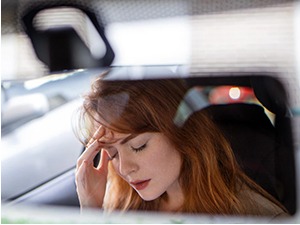 Kinetosis is also defined in medicine as “syndrome of poor adaptation to movement”, and there are several names – seasickness, car or airplane nausea, explains Dr. Bojana Mandic, a guest on the show Magazin on the First Radio Belgrade 1.

“These are conflicting messages that reach our brain, that is, the center of balance, which are in our ear, and what we perceive with our eyes. This can be explained by a simple example like when we are driving a car or a bus and sitting, and our balance center notices that we are at rest, but if we look out the window our sense of sight gets the information that we are moving. This leads to contradictory insights of our senses, which can cause nausea and other mentioned problems “, states the doctor.

But it is known that not everyone will experience unpleasant symptoms of kinetosis, but only more sensitive people, adds Dr. Mandić. “Most often, children between the ages of four and ten have this problem, although it is certain that adults, at least at some period of their lives, often experience such inconveniences when traveling.”

Symptoms of kinetosis are sometimes mild – from nausea or discomfort, to headaches, tinnitus, cold sweats and malaise, and can lead to more serious problems, such as vomiting, drop in blood pressure, and even collapse, that is, it can occur until the person loses consciousness, which is still a rare occurrence.

About how to alleviate the problems caused by kinetosis, Dr. Bojana Mandić says:

“Of course, there are medications, which are usually taken half an hour before departure. They are effective, but they have a limited effect, which lasts about four hours. These drugs have negative effects, cause drowsiness and are forbidden to anyone who drives a vehicle. There are also some natural solutions that can help, “said the doctor.

Those who suffer from nausea when traveling should not sit by the window, and it is also good to prepare for the trip. It is primarily important to drink enough fluids, because every feeling of dehydration encourages nausea. Also, you should not go on an empty stomach, but eat a light protein meal and take more frequent breaks during the trip.

“Ginger and mint are medicinal plants that can alleviate these travel difficulties. “Anything that contains peppermint alleviates the problems with nausea”, notes Dr. Mandić.

It is also recommended not to look at a mobile phone or tablet, and Dr. Mandić advises everyone who suffers from kinetosis to look into the distance during the trip, not to make sudden movements of the head, but to sit comfortably in the seat and relax.