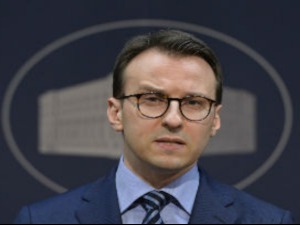 “Instead of anticipating the resumption of dialogue in Brussels, the Prime Minister of the Provisional Institutions in Pristina, Albin Kurti, has shown a minimum of readiness to resolve open issues of common interest, he continues to make inflammatory statements and accusations at the expense of official Belgrade “, said Petar Petković.

He emphasized that it is of key importance for Belgrade to resolve the issue of the missing and that this issue will not be treated through a daily political prism.

“We are not running away from that issue, and we insist on that issue during every conversation in Brussels,” Petković pointed out.

He pointed out that Belgrade has repeatedly stated unequivocally that it is ready to open all archives and search all locations for which there is a suspicion in Pristina that the remains of missing Albanians are on them. He added that at the same time, concrete cooperation of Pristina on that issue is expected.

“Unfortunately, Pristina consistently refuses any mention of opening KLA archives or allowing our expert teams to search locations in Kosovo and Metohija, for which we have very clear indications that they are hiding the bodies of Serbs missing during the conflict,” Petkovic said.

He especially pointed out that Belgrade has so far taken several significant steps when it comes to searching for potential locations, and that one of such is the recent excavations at the Kiževak site. He warned that on the other hand, there is a persistent lack of minimal civilizational readiness to do the same.

“I am sorry that the Pristina side rejects any possibility of cooperation on this issue and treats the issue of the missing exclusively through a showdown with official Belgrade. We will not treat any victim in that way, regardless of ethnicity,” Petkovic said.

He also warned that the issue of the missing is not, nor should it be, a topic for daily political confrontations or upheavals.

“The search for the missing is our obligation towards the past, but also towards the future, our children, peace, compromise and progress,” concluded the director of the Office for Kosovo and Metohija.

Parents who killed the boy confess that he was single: We also killed the girl with the groom – Latest News