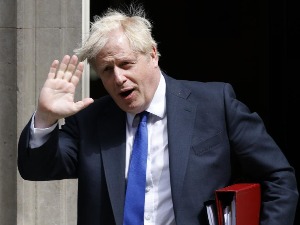 The BBC reports that Johnson will announce his decision to resign as Tory leader during the day.

An election for the leader of the Conservative Party will be held this summer, and a new prime minister will be in place by the Tory conference planned for October.

Dozens of British ministers and aides have previously resigned over the scandals rocking Boris Johnson’s cabinet, calling on him to step down, which he has refused to do.

More than 50 ministers and aides resigned in just 24 hours, and they were joined by Helen Whatley, the British Treasury Secretary, Brandon Lewis, who heads the department for Northern Ireland, and Chris Philip, the Culture Secretary.

One of the prime minister’s closest associates, Michael Gove, was fired after telling Johnson that he should resign.

A series of departures from Johnson’s cabinet started Rishi Sunak, the finance minister and Sajid Javid, the health minister, resigned within just ten minutes of each other.

Johnson then announced that he planned to remain in office and immediately appointed new ministers.

Their example was followed by the Vice President of the Conservative Party, Bim Afolami, saying that Boris Johnson no longer has the support of the country.