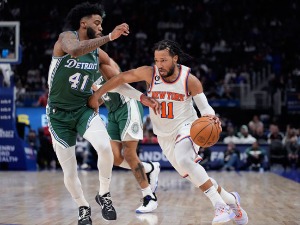 Julius Randle led the New York Knicks to victory with 42 points and 15 rebounds.

The Pistons managed to get within seven points and that was all they could do until the end.

The Detroit Pistons last beat the Knicks on November 6, 2019.

In the next round, the Knicks welcome the Toronto Raptors, while the Pistons play the Chicago Bulls.

In the second match of the evening, the Clippers outplayed Houston with 121:100 and thus recorded 23 wins in the season and with 22 losses they occupy the sixth position in the West. Houston stayed at ten wins and is currently last in the conference.

The duo of Mann with 31 points and Leonard with 30 led the Clippers to victory, while Powell added 18. Gordon was the most effective in the defeated team with 24, followed by Martin with 22 points.

The most effective in the Chicago team was Vučević with a double-double performance – 43 points and 13 rebounds, and he also recorded four assists. He had help in La Vine, who scored 27 points with nine rebounds. In the Golden State team, Thompson scored 26 points, and Curry scored 20 with ten rebounds.