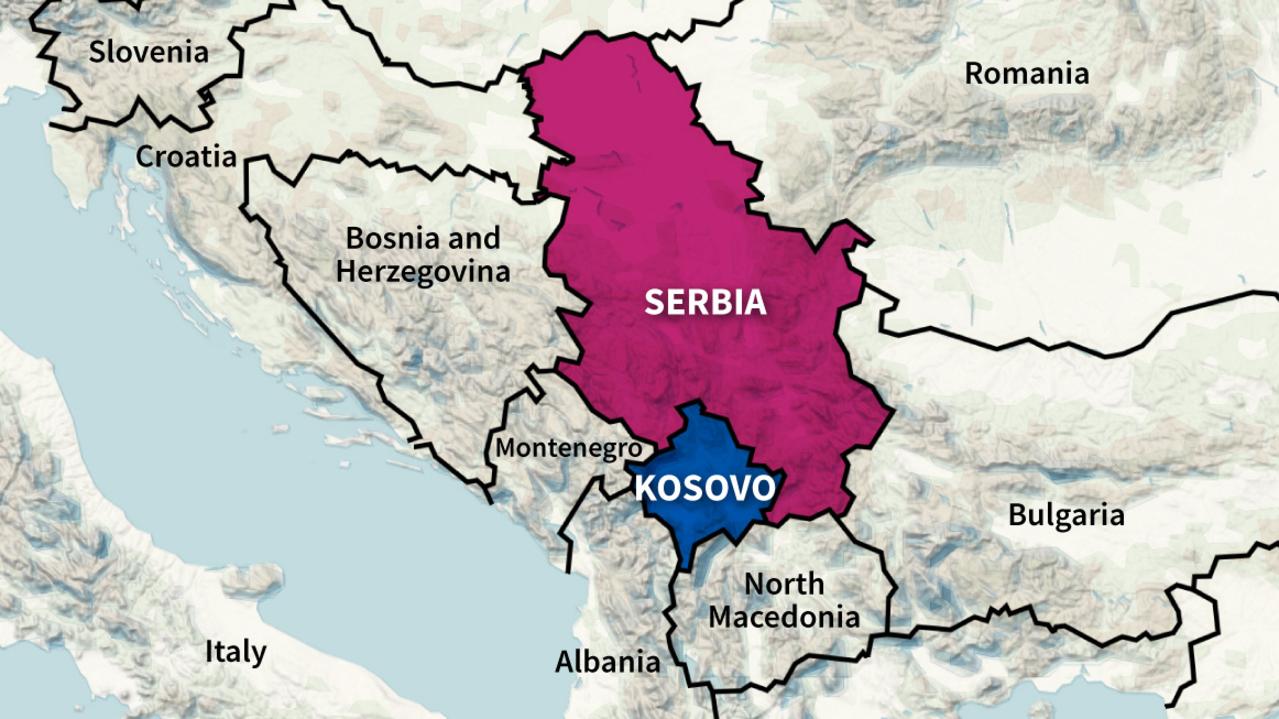 The decades of tension between two mortal enemies reach dangerous proportions, grenades are thrown and troops are on high alert – all because of a license plate.

Afghanistan may not be the West’s only nation-building disaster. Serbia and Kosovo are once again at each other’s throats. And Russia will be the big winner.

All it took was a license plate.

Hundreds of ethnic Serbs have swarmed on cross-border roads to protest the need to use Kosovo-issued license plates in Kosovo. These are embossed with the characters RKS – short for “Republic of Kosovo”.

That implies its status as an independent nation.

Although it insists that Kosovo drivers use Serbian license plates in Serbia.

Grenades were thrown. The Kosovo vehicle registration office was set on fire.

Now Serbia has sent special forces to border checkpoints after its president declared that there were limits to what it would “tolerate”.

In many ways, it is similar to Communist China’s insistence that neighboring Taiwan is just an idiosyncratic province – and not the last stand of the old Republican government of China.

This persistent sovereignty dispute has been simmering for decades.

Kosovo unilaterally declared its independence after a brutal conflict between inconsistent religious and ethnic groups in 1999 triggered a NATO military response.

Serbia refuses to accept the 2008 Kosovo declaration. However, about 117 nations have.

Now, in the midst of intense government upheaval, Kosovo faces a crucial moment.

And so is Europe.

“With two decades of war in Afghanistan reaching the worst possible end, it should be remembered that three decades have passed since the outbreak of the war in the Balkans,” wrote former UN peace envoy and Prime Minister of Sweden Carl Bildt recently for Project Syndicate.

“Both are case studies of how the mismanagement of war can have devastating effects that last for decades.”

Kosovar Serbs and Albanians live in clearly delimited districts. Street signs must be written in both languages. But their education and health systems are strictly separated.

The tiny province is only part of the former Yugoslavia.

After the fall of the Soviet Union, the Balkan Peninsula was largely divided along ethnic and religious lines. Slovenia. Croatia. Bosnia. Serbia. Montenegro. Macedonia.

Of course there was some overlap.

Kosovo was one of them.

Three and a half years of civil war have cost the Balkans more than 100,000 lives and displaced millions from their homes.

War crimes investigations and independence negotiations have continued since then.

Thousands of NATO peacekeepers, including US troops, are still in the province. Your mission is to keep simmering ethnic tensions under control.

“Nobody expected that to happen overnight; but nobody would have thought that the integration process would be so tedious, ”writes Bildt.

He blames corruption, nationalism and extremism for the dwindling international support.

Serbian Defense Minister Nebojsa Stefanovic visited armed border garrisons on Thursday. Several Serbian fighter jets flew overhead. Tanks and troops have been in use since then.

“Our army does not provoke, but it is ready to protect its people,” emphasized Stefanovic.

Serbian President Aleksandar Vucic said on Serbian television that he was “concerned” about the violence against Serbs in Kosovo.

“We made it clear at what limits we tolerate violence,” said Vucic. “Both Europeans and Americans know that. We have been very specific about what our next steps will be and in what order.

In 2011, talks began to resolve the conflict. The Serbian President and Kosovar Prime Minister reunited last month after separating more than a year ago.

“It was not an easy meeting,” admitted EU envoy Miroslav Lajcak. “But it was important that it happened. Both heads of state and government had a very open and frank exchange about what they wanted from the dialogue. “

Since then it has only been going downhill.

The tit-for-tat tagging rules are just one example.

Kosovar President Vjosa Osmani says the world must “not ignore what is clearly seen – a Russian-Serbian move to harm the European Union and NATO”.

“It is time that the international community and especially the EU and NATO member states see such a danger and prevent the Vucic regime from realizing its goal of creating the ‘Serbian world'”, she wrote during of her visit to the UN on Facebook General Assembly in New York.

“Serbia has fallen under the boots of an autocratic regime that flirts with China one day and kowtowed to Russia the next, while its representatives at the European Commission in Brussels continue to look good,” says Bildt.

“Despite enormous efforts by both the EU and the USA, the open questions between Serbia and Kosovo are far from being resolved.”

Serbia and Kosovo can only join the European Union through a binding sovereignty agreement. Germany says it will not allow Serbia to enter without it. For the same reason, other EU countries are also blocking Kosovo.

The outgoing German Chancellor Angela Merkel said a few days before her departure that Serbia and the entire Balkan region still had a long way to go before they would be accepted into the European Union. At a meeting with Serbian President Aleksandar Vucic, she said that his country must achieve an “imperial state” – a nation under the rule of law.

“We were very excited about the accession process – today we are not,” said Vucic. “We don’t care anymore.”

But Russian President Vladimir Putin still longs for the days when the former Yugoslavia was part of his Soviet empire. That is behind his unwavering support for the Serbian nationalists.

And that’s what made it popular.

Mr Vucic insists that any Kosovo solution must be a compromise, “not a solution that will be humiliating and devastating for Serbia”.

So he looked for support elsewhere. And his efforts to strengthen ties with Moscow and Beijing are making Brussels nervous.

At the beginning of September Kosovo administrators warned of a “Russian diplomatic war against Kosovo”.

It accuses Moscow of actively trying to undermine Kosovo’s aspirations for independence, destabilizing diplomatic and economic support for the province, and rewriting the history of war crimes during the collapse of Yugoslavia.

The allegation matches the profile of Moscow.

He is accused of having steadily dismantled Serbia’s democratic institutions. The democracy watchdog Freedom House recently downgraded its status to the status of a “hybrid regime”.

And Mr Vucic knows that in order to join the EU he would have to give up a large part of his status as a “strong man”.

In the meantime, Putin has turned the Balkans into a front line in his “gray area” conflict with the West. Economy, politics and information were used as weapons to remove Serbia from the EU’s influence.

Lately it has been busy upgrading Serbia’s military.

Washington refused to do so, citing widespread corruption as its main concern.

However, Russia’s influence is not the EU’s only hurdle when it comes to stabilizing the Western Balkans.

China has invested $ 4 billion (AUD 5.5 billion) and lent another $ 5 billion (AUD 6.8 billion) to Serbia. And their diplomats are increasingly active in the region.

The European Union, says Bildt, still has one last chance for peace: It must ensure that the summit meeting with the Balkan states planned for October will result.

“The alternative for the Western Balkans is to slide into violence. It happened before. It is happening in Afghanistan now. That must not happen again in Europe.