Male fertility is extra compromised by covid infections, however not completely 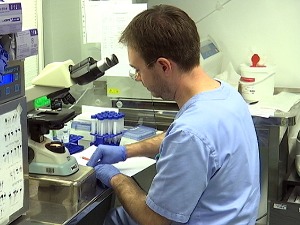 Patients who contracted kovid-19 in the first wave of the epidemic and who now have a problem with male sterility are already appearing in urological surgeries. Urologist prof. Dr. Aleksandar Milošević states that there are already patients who have undergone covid-19 and who have slowed sperm.

As the president of the Republic expert commission for biomedically assisted fertilization, prof. Dr. Ana Mitrović Jovanović, head of the day hospital GAK “Narodni Front”, points out that there is no room for panic, but that one should be careful.

“This is another confirmation when it comes to covid infections, that not only the elderly population is endangered, but on the contrary, young people who have not finished reproduction, as well as people in the reproductive period,” the doctor notes.

Also, a large difference was observed between the influence of the virus on male infertility and female infertility. Given that it is already known how viruses act and what the mechanism of their influence is potentially on infertility, it is similar in the case of coronaviruses.

Why are men a more vulnerable population?

When comparing the male and female reproductive systems, the professor explains, we know that the ovaries are in a woman’s body and are used to a temperature of about 37 degrees Celsius. On the other hand, the testicles are anatomically displaced outside the body precisely because they are very sensitive to high temperatures.

Testicular tissue is sensitive for several reasons, explains the guest of the Morning Program. First of all, they contain an extremely large number of A-Ce-2 receptors through which the coronavirus enters the cell. Upon entering the testis cell, its RNA is transcribed into DNA and the synthesis of proteins necessary for the further survival of the virus in the cell is started. It disrupts the processes that take place in the testicles, disrupts the process of testosterone production and negatively affects spermatogenesis.

Another mechanism is the effect of this virus on the rise in body temperature.

“For all these reasons, there is no symmetrical effect of covid infection on the fertility of women and men. At the moment, men are more endangered, but in general, the effect is small. It refers only to prolonged and severe forms of the disease. Male reproduction compared to female is a process that is renewed. It is only important that during that infection, there is no permanent destruction of the noble testicular tissue “, emphasizes Professor Dr. Ana Mitrović Jovanović.

Men, unlike women whose biological reproductive ability declines after the age of 40, can be fertile at the age of 50, 60 and older. They reduce fertility with age, but it does not stop in the same way as in women when they enter menopause.

Spermogenesis regenerates. The process of sperm production in the testicles is 73 days. Which means that after that time, a new spermatogenesis should start, so if the spermogram is worse after the covid infection, it should not bring a negative prognostic effect and additionally raise the tension “, notes the guest of the Morning Program.

“It is only necessary to repeat the spermogram in two and a half, three months, and then every six months, with high doses of vitamins, which we have been talking about for months, and adequate therapy,” the doctor added.

That is why all the studies presented so far are still of limited importance because there is still no data on whether those patients who had a bad spermogram after covid, and had a good or bad spermogram before the infection, or whether it is the effect of kovid. Also, it is not known how long that influence on spermatogenesis will last, which will only be known in a year or two, the doctor emphasizes.

“At this moment, we only know that kovid affects active infection. To reduce fertility, as well as two and a half months after infection. “After three to four months, when a person is completely cured, if he leads a healthy life and applies a hygienic-dietary regime, it can be expected that the process of spermatogenesis will be completely regenerated.”

That is why it is important to protect this population with the vaccine in order to preserve their reproductive health.

Pregnancy at the time of the corona

From the very beginning of the kovida-19 pandemic, there was uncertainty about how the virus would affect the mother, the development of the pregnancy and the baby itself. As Professor Mitrović Jovanović emphasizes, this is an issue that she has been facing every day since the beginning of the pandemic.

The basic advice, according to today’s guidelines, is that, above all, women who are currently pregnant should not even think about vaccination. Those women who are planning a pregnancy should be vaccinated and postpone the pregnancy for three to five months after receiving the second dose of the vaccine.

The first results, based on publications that analyzed about 130 women born with kovid-19, show that the infection is not transmitted to the child during pregnancy and childbirth, but that the risk cannot be completely ruled out.

Vertical transmission of the infection from mother to baby during pregnancy has not been proven. Babies do not have intrauterine receptors through which the coronavirus can enter the cell. That is why all women who gave birth to children and during an active covid infection gave birth to healthy children.

“But there are situations that children became infected in the first and second month of life by some people who came, for example, to visit the baby, because after birth, that receptor naturally appears in the cells,” the doctor emphasizes.

Do you plan a pregnancy during a pandemic?

As it is not known about other viruses, it is still unknown what effect the covid infection will have on the health of the fetus in the first three months of pregnancy and how it will affect the process of embryogenesis.

The European Association for Human Reproduction recommended in mid-March 2020 that we should wait for pregnancy. In the meantime, these recommendations have been changed and IVF procedures have been continued in compliance with all recommended protection measures.

Full supply of vaccines by COVAX is not expected to happen before the second half of the year, says EU Ambassador to Kosovo – Latest News