New clashes between protesters and police in Peru, at the very least 17 lifeless 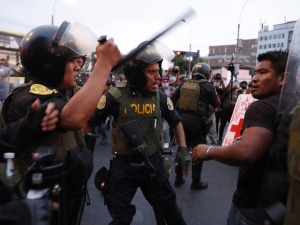 More than 68 people were injured on Monday in the town of Huliaca, according to the Ministry of Health, in one of the worst clashes since the former president Pedro Castillo deposed and arrested last month for attempting to dissolve Congress.

His supporters are demanding that the new president, Dina Boluarte, resign and call for early elections.

Hulijaka is located in the region of Puno, which is the focus of anti-government demonstrations.

Peru has been in political turmoil for years, and the latest crisis came after Castillo announced last December that he was dissolving Congress and imposing a state of emergency, but the representative body voted overwhelmingly to impeach him.

Castillo is currently in custody and under investigation on charges of sedition and conspiracy.

The new government imposed a state of emergency and restricted the freedom of assembly of citizens, but the demonstrations against Dina Boluarte, in which at least 39 people have lost their lives so far, are still going on.