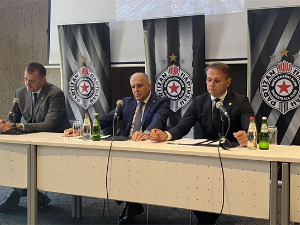 In the Belgrade hotel “Radison Blue”, the Basketball Club Partizan held a promotion of the new coach.

In addition to Zeljko Obradovic, the president of the club, Ostoja Mijailovic, as well as the sports director, Zoran Savic, also addressed the public.

“First of all, congratulations to the people from the Basketball Association of Serbia on the gold at the European Championships. Thank you to the president of the club for the chance he gave me to return and work for Partizan. What I came back for is something that comes from within, the deepest emotions I feel. I am and I am proud to be able to sit on the Partizan bench “, are the first impressions of Obradović.

The new / old black and white coach said that the decision to return was easy.

“I have been trying to help Partizan all these years, I have been in constant contact with the people from the club. I am glad that Ostoja managed to sort out many things in the club, first of all to consolidate some things financially, and now all together to try to return “Partizan is where it belongs. For me, this decision to return was easy. Last week, Ostoja and I met and after that conversation, I broke up,” adds Obradović.

The Serbian expert spoke about his ambitions, as well as what Partizan represents in European basketball.

“I don’t think there is a club in Europe that has given so many players, who were so important, won so many trophies, and then coaches who achieve good results. The only club in that rank is Real Madrid. What I would like is for the European League to recognizes that there are clubs in the former Yugoslavia that have indebted basketball in Europe and that they are trying to make more clubs from this region a permanent participant in the Euroleague.As for ambitions, it will probably be a question, they are the biggest possible. what does my arrival mean, what is expected, the only thing we are interested in is to be someone who will play in the Euroleague, but not for a year, but to be an integral part of the competition. I think Partizan has a place there and Partizan deserves it, “he said. is a black and white coach.

Obradovic also touched on the situation in regional basketball.

“You follow the situation primarily in the ABA league. I am glad to have contacts with all clubs, and since I think that all of us coaches, managers, sports workers have a task and responsibility for some things that happen and cause consequences for the fans.” “I can only promise that I will do everything to lower tensions. That is not good for anyone, we should work on improving basketball and congratulating each other after the match and creating the right atmosphere,” said Obradovic.

The most trophy-winning European coach can’t wait to start doing the job he knows best.

“I don’t think the risk is that I go back, I go back to something I love, it’s about pure emotion. There is a huge desire in me to start working with players, I am happiest when I go out on the floor. The biggest challenge for us is to let’s make a competitive team in all competitions, we know that there is quality here, first of all Red Star, which has dominated in recent years, then Buducnost, Igokea, Mornar, Olimpija, all clubs deserve respect.We have a big job ahead of us, but when you have the desire, you can to do a lot of things.I can’t promise anything else.I promise work, that we will do everything to get Partizan back to where it belongs.If at the end of the season we sit down and say that we and the players did everything in our power, we can be satisfied.”

Silence for the return of Kosovars from Syria – Latest News