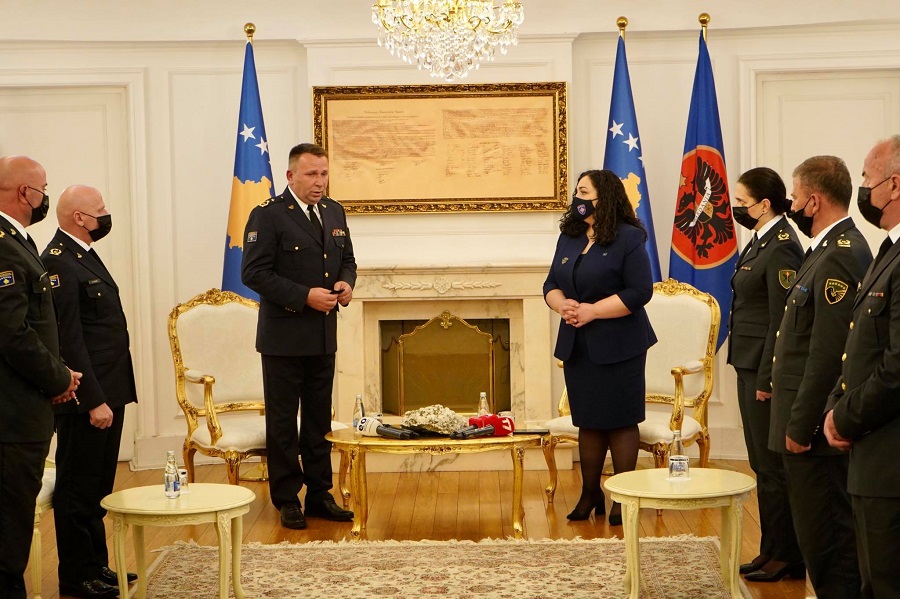 The President of Kosovo, Vjosa Osmani, received today in a meeting the Commander of the Kosovo Security Force, Lieutenant General Rrahman Rama and all the generals of the Force.

On this occasion, Osmani said that he will support the KSF in the transition plan, which according to her, would be ideal to be completed before the deadline of 10 years.

The Supreme Commander of the KSF said that the Kosovo Army will continue to be an example of professionalism and reliability.

“As the supreme commander of the KSF, I offer you all my support, all the readiness to work so that the transition process of the Security Force is done as soon as possible, to have the necessary budget support in order to this transition should be completed on time, and ideally it would be if we could complete it earlier and of course provide the greatest possible international support for bilateral cooperation that the KSF has and advances it with the states already besides, but also participation in multilateral organizations and especially where we have the main goal “, said Osmani.

President Osmani said that the Kosovo Army is ready to move towards NATO membership. Whereas, the commander of the KSF, Lieutenant General Rrahman Rama said that the KSF has already entered the complex phase of transition, which requires support from the state.

“The Kosovo Security Force is among the most reliable institutions, thanks to the commitment, dedication and professionalism shown from the soldiers to the highest level, we have managed to maintain this primacy for 10 years. It is easy to be the first, but to hold this position is a little more difficult, but with the commitment of all and the support of the institutions, but also yours as the supreme commander, we will definitely keep it and fulfill all our obligations. The transition phase is a bit challenging, we have now entered the most complex phase that requires support from you, but also from the Government of the Republic of Kosovo. All the commitments we have made and the existing commitment I believe we will achieve our common goal and goal. This is a common achievement regarding the Kosovo Security Force, we are 24/7 to come to the aid of all citizens of Kosovo, without distinction “, said General Rama.

The meeting with the head of the KSF, Osmani made on her first day of work as president of Kosovo.

Otherwise, the Kosovo Security Force was established in 2009 on the basis of the Ahtisaari Plan, a document that led to Kosovo’s independence. This Force was set up under the supervision of NATO, but its mission and capabilities did not coincide with the ambition of the institutions for Kosovo to have its own army.

After the end of the armed conflict in 1999, in agreement with NATO, the Kosovo Protection Corps was formed as an emergency force. This Corps was later transformed into the Kosovo Security Force.

Meanwhile, the next step, after the declaration of Kosovo’s independence, was for this Force to be transformed into the Kosovo Armed Forces.

The Assembly of Kosovo has finally approved in 2018 three laws, which enable the transformation of the Kosovo Security Force into the Kosovo Army. Although the name of the KSF does not change due to the impossibility of constitutional changes, the adopted laws are estimated to give the KSF military capabilities during a transformation process within a few years.

The next success of FHK, the qualification tournament will be organized in Kosovo – Latest News