Poll: Which of the 24 songs competing in Serbia’s Beovizija 2020 is your favourite? 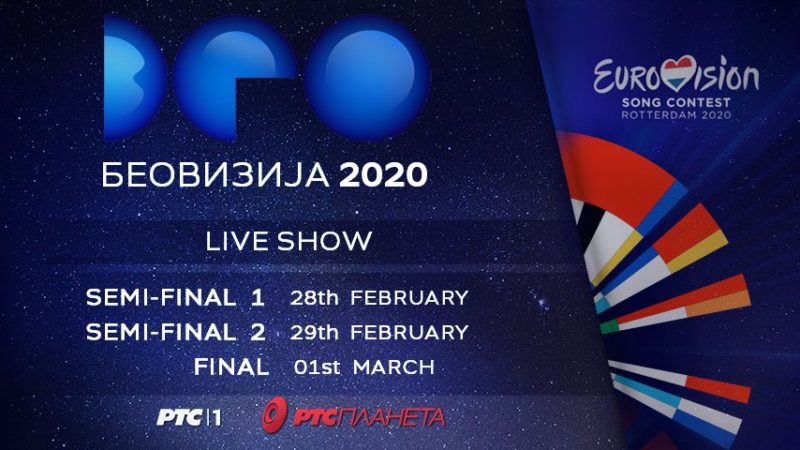 We may have known who we were going to be attending Beovizija 2020 since January, but until recently most of the participants’ songs were wrapped in a mysterious blanket. RTS has published all 24 competing entries in the national selection of Serbia on its official YouTube channel. Therefore we want to know who you think should win and represent Beovizija 2020 Serbia in Rotterdam.

Here’s a quick rundown of the show after we know all the details, acts, and songs.

Beovizija 2020: All songs and participants

You can listen to all 24 entries competing in Beovizija 2020 in the YouTube playlist embedded below.

There are a number of notable names on the line, including the girl group hurricane. The group consists of the representative of Serbia Eurovision 2016 Sanja Vucic, Ivana Nikolic and Ksenija Knezevic. Ksenija is the daughter of another Eurovision alumni – Montenegrin singer Knez from 2015.

Another great name is Neda Ukraden. Ukraden was born in Croatia and now lives in Serbia. In the 1970s and 1980s, Ukraden was a big star in the former Yugoslavia. Her career has been going strong to this day, largely because her recent releases are extremely club friendly. Bane Mojicevic is also a notable name. He is known for winning reality shows like Zvezde Granda and Your Face Sounds Familiar. During his time with the latter, he even went into the Eurovision 2014, which Conchita Wurst won as “Rise Like A Phoenix”.

A considerable number of well-known names are also represented in this year’s Beovizija line-up, some of which have even made their way to the Eurovision stage itself. Bora DugiEx, the flutist who accompanied Jelena Tomašević on home soil in 2008 Ana Milenković and Sanja BogosavljevicBoth members of the background singers of Marija Šerifović are all trying to bathe in the spotlight of Eurovision as leading actors. In addition, numerous familiar faces return to Beovizija after a year or a fairly long leave of absence and employ Ivana Jordan, Amvon Duo, Ivan Kurtić and even Sashka Janx, albeit as a composer.

Although a newcomer to Beovizija, Thea Devy has confirmed that their entry has reached the last three in Austria’s internal selection for Eurovision 2020. After he was not selected, she translated the texts into Serbian and submitted them to RTS. Time will tell if Austria made the right decision to choose Vincent Bueno instead.

These are just some of the 24 artists taking part in Beovizija 2020. However, check out the remaining artists below.

Similar to last year, we will experience three nights of Serbian music – two semi-finals and a grand final. Each semi-final will feature twelve acts, only six of which will make it to the grand finals on Sunday March 1st.

The outcome of the competition is determined by both a jury and the public. 50% of the votes come from industry experts and the rest from televoting. It is not yet known who the judges will be or how many there will be, but the way the votes will be announced will be the same as last year.

After the judges have awarded all of their points, these will be converted to 12, 10 8-1 based on a contestant’s jury ranking. Thus, the televoting results follow in a similar fashion, with the act with the highest rank receiving 12 points, the second highest 10 points and so on. The artist with the highest number of points at the end will be given the right to represent Serbia at Eurovision 2020 in Rotterdam in May. It is important to note, however, that RTS has indicated that they have the right to choose who will ultimately win the ticket for the Netherlands in case there is any problem with the winner or song.

Beovizija will again be broadcast from RTS’s Studio 8. Viewers can follow the competition on RTS 1 or on the RTS Planeta broadcaster’s online portal. Four presenters will lead the show’s viewers, namely Dragan Kosjerina, Kristina Radenković, Stefan Popović and Jovan Radomir – whom you may remember at the Eurovision 2016 press conferences and as the Serbian jury member for the Swedish Melodifestivalen. The show begins at 9:00 p.m. CET. So delete your calendars!

24 entries, but only one can prevail. Will we see a familiar face in Rotterdam this year who represents Serbia, or will someone take over the rule of the Balkan republic again? Be sure to listen to all of the songs and vote in our poll below! You can vote on as many acts as you want, but you can only vote once. Before you click Submit, check the box next to each action you want to support.