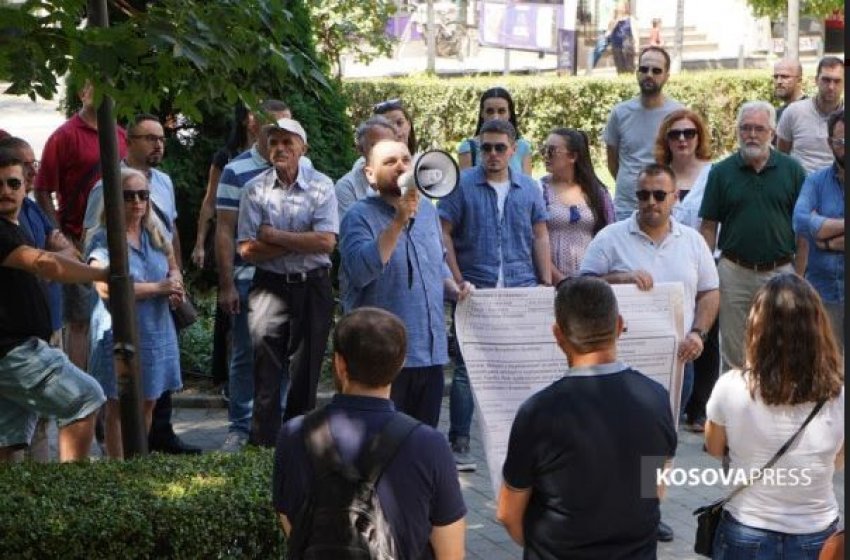 The delay of works on the street “Muharrem Fejza” in Pristina, which has become a concern for citizens for some time now, has caused the residents of this area to protest on Tuesday in front of the municipality.

Residents are criticizing the municipality for not coordinating and not managing the works. All this negligence of the communes is costing the citizens who live in this part of the capital.

Residents were promised that the works would be completed on August 13, but that this is far from being realized.

The organizer of the protest, Dren Shahini said that all the works that are being done on this road are without security and that every day endangers the life of everyone who passes there.

Shahini: There is neither oversight nor coordination

“There is no coordination, no supervision. We express revolt and indignation because we have seen your projects both in ‘Peyton’ and in the street of ‘Llap’ as they have lasted. We know and we are convinced and after two months we will have to wait again. Do you know how you left the underground cables, and that they are a danger to us. If a cable needs to be replaced then it will have to be completely open to the road, and all of these would have to be part of your management plan and not us coming and reminding you. You have been waiting to come for a walk with us and see what is created there, the acoustic noise created by the works. Did you know that all the works that are taking place are without a minimum of safety, I have to walk on cables and holes that open to the contractor to go to the other side of the road because somewhere I have to walk, to go to the apartment, we also have to live and live there daily, and not only when the road ends. We are the neighborhood that contributes to its own budget. The taxes that you steal from the builders, as from us, are higher than any neighborhood that you take and at the end of the mandate you decided to return them to us with a project which you are taking out for us “, said Shahini.

The director of Capital Investments in the Municipality of Prishtina, Gëzim Mehmeti, appeared before the protesting residents and invited them for a face-to-face meeting, while adding that he failed to complete the works for central heating.

Mehmeti: The solution I prefer is to finish the central heating

“The solution I prefer is to finish the heating, to finish the construction and installation on the street, I am not satisfied with the work of the economic operators, even if we are dependent on them. The second solution is to stop the central heating, and inside “the instillations should be completed in three weeks”, he said.

In the meeting that took place inside the municipal building, Shahini reiterated that he was there to talk about the problem with the road.

Shahini: I came to talk about “Muharrem Fejza” street

“I came to talk about Muharrem Fejza, not for 200 and 500 meters. Why in the beginning you did not work only in 200 meters, and when it is finished to start with 500 meters? Under two, I sent the photos where see how the cables are buried which are buried without sewerage, those cables we can never change.The deadline is August 13, the deadline is the total[…]”We just want freedom of movement, not when our vehicles are damaged, but also when the construction is completed,” said Shahini.

While Mehmeti presented two possibilities for this, but said that the neighborhood then remains for the next 15-20 years without heating.

Mehmeti: I am telling you about the competence of the director

I am telling you from the competence of the director of capital investments, contract management we have two options, it is an opportunity to completely terminate the economic operators who are not part of the municipality that do not have a contract with the municipality, ‘Termokosit’, ‘KEDS In this case, even the public companies that are expanding the internet network, I can do it, it means that it is the easiest solution for me, if today I give an order to suspend the work permits, we tell the inspection, the inspection comes out and inspects the work and they are withdrawn from the workshop, which means the neighborhood is alive for the next 15-20 years without heating, ”says Mehmeti.

Whereas, Arbene Abrashi, citizen of this road said that initially the winner was announced and then they coordinated with other operators

Abrashi: When you announced the contractors, you had a coordination of works

“When you announced the contractors, you had absolutely no coordination of work. Now you are telling us that we have to decide,” she added.