RTS :: Commemorative session for the victims of the Cetinje bloodbath: The entire of Montenegro mourns 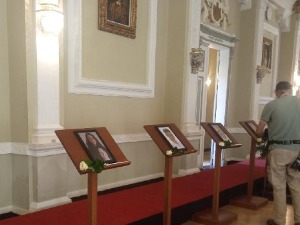 It is the second day of mourning in Montenegro, which was struck by a tragedy on Friday, when a 34-year-old man killed 10 people in Cetinje, including two children, and wounded six others.

A commemorative session was held in the Government House, which began with a minute of silence for the victims.

The mayor of Cetinje, Nikola Đurašković, said that a tragedy of unprecedented proportions hit Cetinje and Montenegro and left everyone in shock.

“Since the day before yesterday, our city has been gripped by sadness and shock, that innocent victims died without any guilt in a senseless attack. This kind of day cannot be remembered,” said Đurašković.

“We will remember with special respect our Nataša and her angels Mašan and Marko, our Danica, Dimitrije, Rajko, Aleksandra and Mila, Mitra, Goran. Their brutally interrupted lives remain a part of our memories, but also a warning to everyone to do everything to prevent such a tragic event never do it again,” said Đurašković.

The Vice President of the City Assembly, Mirko Stanić, said that Cetinje is shrouded in sadness like never before.

“Cetinje is as never before united in pain with a sincere feeling of sadness that affects us all,” Stanić said and added that there are no words of comfort for the members of the families of those killed.

He said that, as many times before, Montenegro was unfortunately united by sadness.

“Cetinje is not alone in its grieving, the whole of Montenegro is grieving,” said Stanić, emphasizing that support from other cities means a lot.

After the Commemorative Session, Tiodor Radunović, whose two family members were killed in the massacre, addressed the representatives of the authorities, requesting that the man from Cetinje, who is suspected of having shot the attacker, not be prosecuted.

Radunović called for the release of responsibility for the man who, as he said, stopped the bloody feast in Cetinje.

He called it a heroic act, after which applause and words of support were heard in the hall.

The commemoration was attended by members of the families of the tragic victims, representatives of the local government, the government, Prime Minister Dritan Abazović, as well as the President Milo Đukanović.

Attacker Vuk Borilović killed 10 people and wounded six in the Medovina neighborhood of Cetinje, near the Government House, on Friday.

According to official data, the attacker entered the apartment of his tenants around 15:30 and killed an eleven-year-old boy at the door, then his three-year-younger brother, and then shot their mother through the window.

After killing them, he called their father and husband and told him: “I killed both your family and mine,” according to the interlocutors of Vijesti from the Police Directorate.

In the next 45 minutes, within 80 meters of his house, he killed seven more people and wounded six.

The police announced that they fired 20 bullets at Borilović. They are still determining the circumstances of the crime and whether Borilović died as a result of a serious wound or a bullet that was subsequently fired by a citizen who was said to be unavailable to the police.

As reported, the police have information about changes in the behavior of Vuk Borilović, but, as the police say, there were no indications of the potential commission of such a crime. They say that on this occasion Borilović was scheduled for a specialist examination.

The police have no knowledge, nor has it been reported, that there were earlier conflicts, nor an attack in the last period by Borilović on the family of a tenant.