RTS :: Milos Bikovic: Cadets are the delight of Serbia 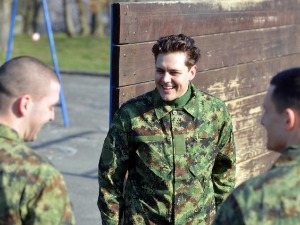 For Bikovic, it was an opportunity to gain valuable experience for the roles that await him in the future, and for cadets to meet and make friends with one of the idols of the generation.

“The army and military personnel have a special way of thinking, a code of conduct and a value system, and I came to the Military Academy to get acquainted with that and, in a way, improve myself as an actor and prepare for some roles ahead of me,” Milos said. Bikovic.

He explains that one day in uniform, he did not change his view of the army and military personnel, but the immediate experience changed the feeling and experience of the army.

“Today I had the opportunity and honor to stand in line with the cadets when the flag was raised. It is something that can be retold in the film, but when a person is there and when he feels it, something works and reacts in his stomach and blood. is one moment I’ll take from here, and the others are these
wonderful young people who are, and you can see that in their eyes, healthy mentally and physically, spiritually … Good people. They are, really, pride and pride, “Bikovic pointed out.

Third-year cadet Andjela Vuckovic says that she and her colleagues are honored that the famous actor Milos Bikovic was in line with them and that he trained with them on the infantry obstacle course.

“We are delighted with how easily he crossed the training ground and how there is no fear when he faces challenges. He is spontaneous, interesting and witty. I got the impression that he adheres to the right values ​​and respects the army,” said cadet Vuckovic.

The working day at the Military Academy for Miloš Biković began with a morning parade and raising of the flag in the cadet line, followed by training at the infantry obstacle range and a martial arts class at the sports center. The actor also had the opportunity to try his hand at shooting with infantry weapons in the film and pistol shooting range, as well as to be convinced of the quality of the kitchen, which prepares food for future officers of the Serbian Army every day.

RWC “Prishtina”: Some tips for using water in residential buildings

Panel discussion on environmental litigation and human rights in Serbia