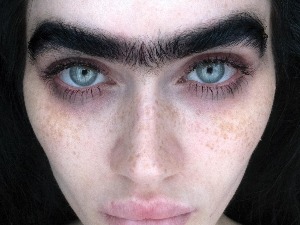 Sofia is 25 years old and already an established name in the modeling world. Her portfolio includes collaborations with renowned magazines such as Vogue, Elle, Harper’s Bazaar, and she has also performed at fashion shows of many well-known fashion brands.

What sets Sofia apart from the others is her striking, fused eyebrows, which she, like millions of other women, could have easily plucked, waxed, tattooed, or whatever, and fit into generally accepted aesthetic standards. But she didn’t want to.

Proud of her roots and her origins, she decided to nurture and highlight this genetic characteristic of her ancestors and try to enter the world of fashion as “imperfect” as she is – with one eyebrow, freckles on her face and a “modest” height of 168 cm.

And she succeeded. What would have been unimaginable ten years ago, now, in the era of positivism and acceptance of one’s own body and diversity, has become achievable.
Sofia even became an activist for the right to diversity, founded the “one eyebrow” movement – #unibrowmovement, and has hundreds of thousands of followers on social networks.

Her fight against prejudice also has its dark side, because she is often the target of criticism from those who do not like her appearance, and even received death threats.
This girl ignores negative comments and says: “Change the world without changing yourself!”