RTS :: Underwater forest in the course of the Mediterranean 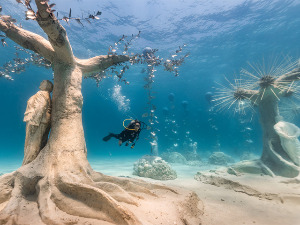 Through the installation, which explores the relationship between man and nature, Taylor wants to put in the center of attention “the revitalization of our natural spaces” and “afforestation of areas of infertile habitats.”

Some of the figures shown include huge trees weighing up to 13 tons, as well as children holding cameras aimed at adults while playing hide and seek.

“I tried to include as many associations as possible with climate change, habitat loss and pollution, because these are really key issues of our time,” Taylor told CNN Travel.

“Somehow, I hope that this setting will evoke a feeling of hope in visitors and the realization that human influence does not always have to be negative. That we can change some bad things we have done “, adds the artist.

Each of the sculptures, which are lowered below the surface by crane, are made of inert pe-ha neutral materials that attract marine life and are placed at different depths, so that the biodiversity of the area can be “enriched” over time by their presence.

“After five or six days, I could already see a thin layer of algae on each of the heads of the sculptures and they were already full of small fish. So that was very, very encouraging. I am really happy that when I return again in a couple of months, I will be able to see how my sculptures are united in the life of the sea “, the artist hopes.

Taylor spent almost two or three years working on this underwater museum in Cyprus, which was supposed to open last year, but was postponed due to the pandemic.

The museum actually starts on the mainland, with an entrance set up on Perner Beach and a path leading to a floating platform that leads down to the sunken sculptures.

The installation is available to bottle divers, and Taylor hopes to attract more visitors to this marine-protected area of ​​Cyprus, which he says has “the best visibility he has encountered so far.”

“This is not a tropical area, which has coral reefs and the biodiversity they bring, but is a more temperate area. It will also attract different types of marine life, and this is one of the first installations I have done where the works go from the seabed to the surface, with floating elements, ”explains the artist.

One of the sculptures is strategically placed so that it looks at the bare sand along the waters of the Mediterranean, which is considered to be the most caught sea in the world.

The museum was created from the joint cooperation of the Department of Fisheries and Marine Research, the Municipality of Ayia Napa and the Ministry of Tourism of Cyprus.

“The underwater museum will be a living visual and ecological experience, with works of art interacting with nature that will develop over time. I am sure that it will bring people closer to the marine environment and the preservation and protection of our marine ecosystem “, states Marina Argiru, director of the Department of Fisheries and Marine Research.

Taylor’s work is primarily aimed at promoting ocean conservation and highlighting the effects of climate change. He is currently working on new exhibits for the Australian Museum of Underwater Art in Townsville, on the Great Barrier Reef, which has lost half of its corals in the last two decades, as well as on a future exhibition to be housed in the Red Sea.

At the beginning of the year, the artist started an underwater museum near Cannes in France, which consists of six portrait sculptures weighing about 10 tons.