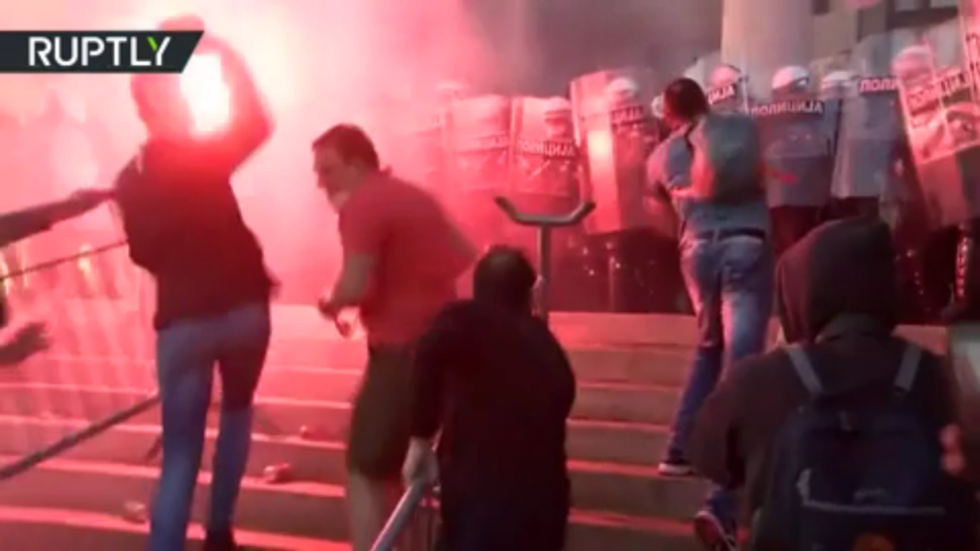 Thousands of people gathered in Belgrade and other major cities to protest the Serbian government’s intention to reinstate the coronavirus lockdown. Stones and tear gas flew when they clashed with riot police late into the night.

Belgrade police reportedly dispersed most of the demonstrators at midnight local time on Wednesday after nearly five hours of clashes and clashes with a crowd of mostly young men and women.

What began on Tuesday as a protest against the announced second round of Covid-19 lockdowns quickly turned into an attempt to storm parliament and fight the police.

Interior Minister Nebojsa Stefanovic said 10 officers were injured on Wednesday, including one who broke both legs after being pushed down a flight of stairs. He added that police only used violence when protesters tried to “lynch” them using fence posts, clubs, shovels, stones, tear gas canisters and even Molotov cocktails to attack the officers.

Meanwhile, videos shared by protesters on social media showed a group of riot police beating a protester curled up on the ground.

After the first night of the protests, President Aleksandar Vucic blamed the violence on “right-wing extremists” who took over as “decent citizens” angry about coronavirus restrictions withdrew.

He also pointed the accusing finger at “all kinds of influence from foreign security services” without going into detail.

Accusations of foreign interference have been a sensitive issue in Serbia since the US-backed “Color Revolution” of October 2000 that brought the “Democratic Opposition” coalition to power. In 2012 she lost power to the Vucic Progressive Party. The Democrats boycotted the general election last month, claiming they were being stolen.

Also on rt.com
Belgrade is not protesting the lockdown of Covid-19, which was kidnapped by right-wing radicals – the Serbian president

Some opposition leaders actually tried to take over the protests on Tuesday; The video showed former Foreign Minister Vuk Jeremic being booed and hit on the head as he tried to join the crowd outside Parliament.

On Wednesday, the Democrats blamed the “regime provocateurs” for the incident and organized a small protest themselves. However, when former President Boris Tadic tried to join the main crowd, he was booed, insulted, and evicted.

Local media showed photos of demonstrators wearing a cross and waving all sorts of Serbian flags, including the one dedicated to Kosovo, a breakaway province led by NATO and ethnic Albanians since the 1999 war. Vucic is due to meet with French and German leaders later this week to arrange negotiations with the ethnic Albanian leadership and many of the protesters accuse him of “treason” for allegedly planning to recognize their secession.

Some of the hand-made signs carried by demonstrators included the “Otpor fist,” which became notorious in 2000, but also said, “This is for you, Papa” – quoting a young man who told reporters on Tuesday that that his father died from Covid-19 because there weren’t enough fans.

Vucic has denied this claim but insisted that a new lockdown may be needed as new cases and deaths from the coronavirus have risen and hospitals reach full capacity.

In addition to Belgrade, there were also reports of protests in Niš and Novi Sad.

Argentine legend: Messi should leave Barcelona and transfer to one of these three teams – Latest News