Selaković with Metropolitan Sava of Warsaw 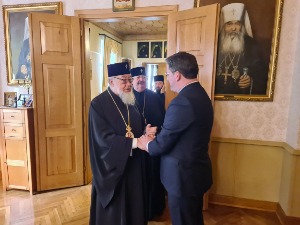 In a conversation with Minister Selaković in the Metropolitanate of the Polish Orthodox Church, Metropolitan Sava reminded of his stay in our country, as well as in Belgrade, where he completed his doctoral studies in theology in 1966.

In the same year, before the Serbian Patriarch Herman, he became a monk in the monastery of Rakovica in Belgrade and took the name Sava, as part of the first Serbian archbishop Sava.

The head of Serbian diplomacy pointed out that Metropolitan Sava belongs to Serbia, and not only to Poland, to which the metropolitan told him that he was a Serb, that he had a Serbian name, and that Serbia was his second state.

Selaković invited the Metropolitan to visit Belgrade and the Temple of Saint Sava, and conveyed the greetings of the President of Serbia, Aleksandar Vučić, and the Patriarch of the Serbian Orthodox Church, Porfirio, according to a statement from the Ministry of Foreign Affairs.