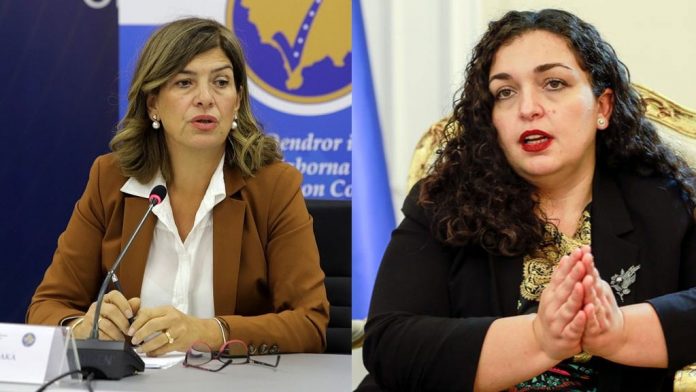 Opposition parties in Kosovo have opposed the decision of the President of Kosovo, Vjosa Osmani to dismiss Valdete Daka from the position of chairwoman of the Central Election Commission, and although they say that the decision was unconstitutional, no one has yet sent this decision to the Constitutional Court. as expected.

The Democratic League of Kosovo is not giving the signatures for sending this decision to the Constitutional Court, saying that such a thing belongs to the People’s Advocate.

The Democratic Party of Kosovo in the collection of signatures so far has found support only in the Alliance for the Future of Kosovo, while they have not yet managed to collect enough signatures for this issue to be evaluated by the Constitution.

Shkëmb Manaj from the Democratic League of Kosovo, said that they estimate that by sending the decision of the President to the Constitutional Court it is better to deal with the People’s Advocate.

Manaj said that “We assess that it is good that this issue is raised by the People’s Advocate and not by the opposition parties so that there is no position-opposition fight for the post of CEC chairman.”

We expect the People’s Advocate to perform his duty and submit the appeal to the Constitutional Court.

The request is, we are waiting for the reaction of the People’s Advocate, the request has been public. ”, Manaj.

The Telegraph has tried to get a statement from the Office of the People’s Advocate regarding this issue, but so far has not received a response.

On the other hand, the Democratic Party of Kosovo has started collecting signatures to send this decision to the Constitutional Court.

PDK MP, Blerta Deliu-Kodra has confirmed that the collection of signatures has begun, as she did not disclose how many signatures have been collected so far.

Meanwhile, Lëvizja Vetëvendosje emphasizes that the action of President Osmani has been in accordance with the constitutional provisions and legal norms.

Acting Head of the Parliamentary Group of LVV, Mimoza Kusari-Lila said that the decision of President Osmani was in accordance with constitutional provisions and legal norms.

“Everything is in accordance with constitutional provisions and legal norms.

“Everyone is free to send to other bodies for interpretation of the decisions of different instances”, she said after one of the meetings of the Presidency of the Assembly. / Telegraphy /