Serbia can obtain a second victory on the World Handball Championship, Germany is just not insurmountable 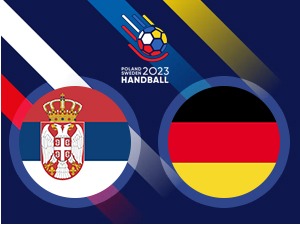 Germany, led by coach Alfred Gislansson, is considered a slight favorite. However, the “eagles” are in the first match of the preliminary phase of the world championship in win against Algeria showed a high level of organization in attack.

The fact that all players in the protocol participated in the game against Algeria additionally contributes to the encouraging approach that Serbia can achieve a favorable result in the second match of the tournament.

German handball in the hands of an Icelander

At the start of the tournament, Germany was better than Qatar 31:27 with which they won two points. Based on the game and behavior of the players on the field, there is a noticeable desire for the Germans to compete in the finals of the World Cup with the aspiration for a high ranking.

Gislason was appointed as the coach of the German national team in 2020, the Icelander was given a very demanding task on that occasion – the reconstruction of the handball selection, i.e. the return among the best handball teams in Europe and the world.

In the short term, the first results were not achieved, because Germany achieved the worst result in history at the 2021 World Cup in Egypt; she finished in 12th place.

At the European Championship in 2022, they were seventh, truth be told, with problems due to the non-play of key handball players infected with the coronavirus.

Regardless of the poor results, their ambitions are still high, especially since Germany will host the European Championship next year and the World Cup in 2027, with the next four years being crucial for the future and success of the national handball.

In this year’s tournament, Gislason tried to create a well-balanced team consisting of experienced players such as Andreas Wolff, Philipp Weber or Johannes Gole, as well as young players such as defenders Luka Vicke, Julian Kester and Juri Knorr.

The German coach did not make any promises before the start of the World Cup.

When asked about the goals and scope of the selection at this year’s world handball tournament, he briefly commented that they will compete in a very uniform group.

“We want to present ourselves in the best possible way in Poland and Sweden,” Gislason said, according to the official website of the German Handball Association before the start of the World Championship.

It is certain that Germany wants to avoid finishing outside the world’s top 10 teams for the third time in history.

In that context, but also after the victory over Qatar, it is certain that they will play at their best against the Serbian team.

Serbia can achieve a favorable result in the match against Germany

Serbia outplayed Algeria in the first round with 36:27scoring the most goals in a Men’s World Cup match since 2009, when the Eagles defeated Saudi Arabia with 38 goals.

Based on the game in the first game of this year’s tournament, it is noticeable that there are details that are not to be praised, for example, the defense that seemed a bit out of sorts.

The left winger of the Serbian national team, Ilija Abutović, pointed out the day before the match with Germany that the team he has to play at a higher level than in the match with Algeria.

“We know the German team better than the Algerian selection. We are preparing well, but we have to play at a higher level and hope for the best result. What is certain is that we will not give up and that we will fight for the whole 60 minutes regardless of the development of the situation.” Abutovic pointed out.

When it comes to the Serbian national team, the fact that all the players got a chance in the match against Algeria and showed that coach Toni Girona did the right thing when he invited them to the national team is pleasing.

For example, he replaced Lazar Kukić at the center back position Stefan Dodic who showed that the team can rely on him in the crucial moments of the match, although he is a young player, but not inexperienced.

Before the start of the World Cup, the match between Serbia and Germany was characterized as a battle for first place in Group E, which came true after the victories over Algeria and Qatar in the first round.

The upcoming duel gains importance because the stake is really high – two new points and passage to the next round of the competition.