Serbia makes use of fuel from storage as a result of excessive electrical energy consumption, the “Družba” oil pipeline is working once more 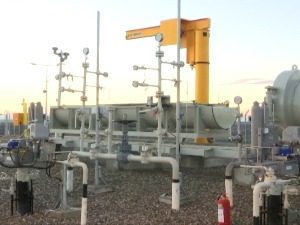 On the trilateral summit also talked about the energy crisis. The “Družba” oil pipeline is one of the longest in the world. It starts from Russia and splits into a northern and a southern branch towards central and western Europe. Fortunately, yesterday the oil pipeline was not damaged by rockets, but only a power plant on the border of Belarus and Ukraine that supplies it with electricity, which was quickly repaired.

“For now, small amounts of oil are flowing towards Hungary, but I expect that the flow through Druzba will soon reach full capacity. The security of oil supply was not threatened because Hungary has several months’ worth of supplies,” said Hungarian Foreign Minister Peter Szijártó.

“We can count on each other. When hostilities between countries arise in Europe, it must be said that there are solutions as good as this. As long as Serbia has gas, so will Hungary. And Serbia can be sure that, as long as Hungary has gas, it will have and Serbia,” says Hungarian Prime Minister Viktor Orban.

The price of gas has increased four or five times in the last ten days and exceeds 1,500 euros again, says the President of Serbia and confirms that gas is already being withdrawn from storage these days due to the increasing consumption of electricity.

“Gas saves us thanks to the Pannonian power plants TE-TO Novi Sad and Pačevo that we can winter over. Otherwise, based on coal, renewable sources including hydro, we would not be able to survive. I am more of a pessimist than a realist, but I want to tell people that we prepared well, that we invested a lot of money, that we counted on all that,” said the President of Serbia, Aleksandar Vučić.

He says that our country also counts on the import of green electricity from Azerbaijan through Hungary and Romania.