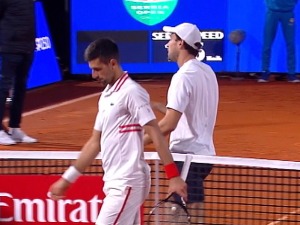 Djokovic and Karacev played a great match. As the match progressed, the game flared up.

There was a great and exhausting struggle. We saw everything that makes tennis interesting. A few reversals, impossible moves, a lot of running, a happy bounce of the ball from the top of the net.

“Cleanup” lines are on several occasions. Long points, some of which had over 30 exchanged shots. A review of breaks and missed break opportunities. In the end, only one could win, and that was Aslan Karacev tonight.

Djokovic entered the match very well, with one break he came to an advantage of 3: 0, but seemingly unnecessary nervousness in the fifth game led to Karaev’s break.

After that, the opponent acted better on the court, in the ninth game he again took the service away from our tennis player and had the opportunity to solve the set with the service. However, Djokovic gathered his strength and returned the break. However, in the next game, Karacev reaches the break again.

Then Karacev served for the set for the second time, he managed to save three break points and won the game and set 7: 5.

The sequel brought a similar picture. Novak took the lead with 2: 0. Karacev immediately returned the break. Then he managed to get on his serve and equalize. Then Djokovic gave in and lost his service game, so that the opponent reached the advantage.

Novak missed the break opportunity again, so Karacev reached 4: 2 in the second set. Novak returned the break to the next service of the opponent, and then took the lead again – 5: 4. With a new break after a great fight, Djokovic won the second set – 6: 4.

Great and relentless fight in the third set. The players managed to save their serves even though they faced numerous break opportunities. In the first six games, it was 3: 3, and enough information about what kind of fight took place on the field is that that period lasted 50 minutes.

Karacev was the first to break in the third set in the seventh game. Then, the Russian missed the match ball on Djokovic’s serve.

What he missed on Novak’s serve, Karacev used on his own, the opponent wins the serve and puts an end to the set and the match – 6: 4 in the deciding set.

This is how the match went.