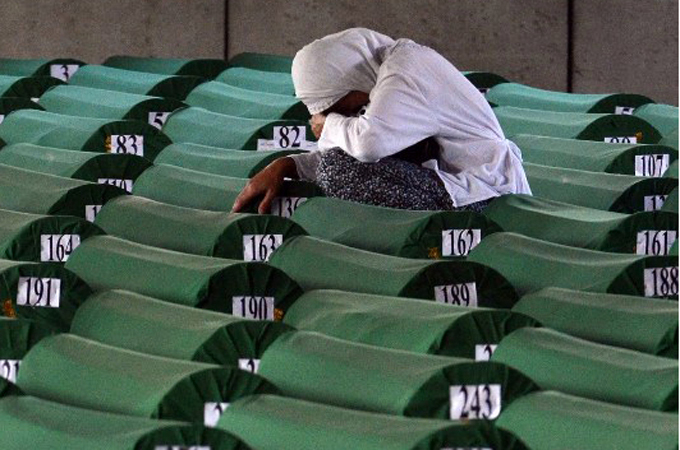 Tomislav Nikolic asks for forgiveness for the Srebrenica massacre of 8,000 Muslims in 1995, but doesn’t stop calling it genocide

Serbia’s nationalist President Tomislav Nikolic has for the first time personally apologized for the Srebrenica massacre of 8,000 Muslims in 1995, but has not labeled it genocide.

“I kneel down and ask Serbia for forgiveness for the crime committed in Srebrenica,” Nikolic said on Thursday in an interview that is to be broadcast on Bosnian national television and parts of which were broadcast on You Tube.

“I apologize for the crimes that each individual has committed on behalf of our state and our people,” he said in the interview.

Nikolic’s office confirmed the authenticity of the statement to the AFP news agency.

Al-Jazeeras Aljosa Milenkovic reported from Belgrade: “Maybe it sounds like a small political earthquake here in the Balkans, as President Nikolic apologizes for the crimes that the Serbs committed during the violent breakup of Yugoslavia in the 1990s.”

“But if you read more in the interview, he still didn’t recognize what happened in Srebrenica as genocide.”

During the Balkan War between 1992 and 1996, thousands of Bosnians, mostly Muslims, were killed by Serb soldiers.

After his election in May last year, Nikolic caused a sensation in the region by refusing to recognize that the massacre in the Bosnian enclave was genocidal, despite being ruled as such by two international courts.

Nikolic said at the time: “There was no genocide in Srebrenica”.

Emir Suljagic, a survivor of the Srebrenica massacre, told Al Jazeera that Nikolic and the government were “two-faced”.

“Mind you, we are dealing with a hard-line nationalist who is letting Kosovo go,” he added, saying that the president’s apology was “one of the many apologies made by the president in the Balkans.”

Up until five years ago, Nikolic was a top official of the ultra-nationalist Serbian Radical Party, which denied that the Serbian armed forces committed crimes during the Balkan Wars.

Their leader Vojislav Seselj is currently on trial for war crimes before the United Nations International Criminal Court for the former Yugoslavia (ICTY) in The Hague.

While this is Nikolic’s first apology to Srebrenica, Serbia has expressed regret over the deaths in the past.

In 2010, the Serbian parliament passed a historic declaration condemning the Srebrenica massacre, as a gesture that ended years of denial by Serbian politicians about the extent of the murders, but Nikolic did not support the move at the time.

Nikolic’s predecessor Boris Tadic also apologized in 2005 at a memorial service to the victims of Srebrenica.

Both the ICTY and the United Nations Supreme Court, the International Court of Justice, have labeled the Srebrenica massacre as genocide.

Bosnian Serb political and military leaders Radovan Karadzic and Ratko Mladic are currently on trial for genocide over their roles in the ICTY massacre.

The assassination of the President of Haiti, the state of emergency is declared – Latest News