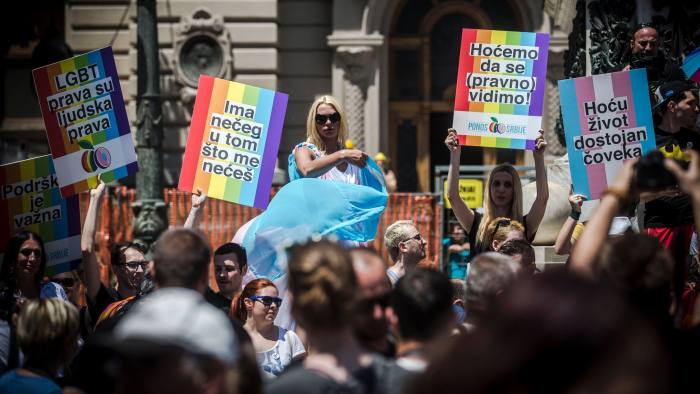 Subscribe to myFT Daily Digest to be the first to know about world news.

Ana Brnabic would rather be known for her political work on e-government than for her sexuality. “Hopefully this will be over in three or four days and then I’ll no longer be known as a gay minister,” she said when she was appointed to the Serbian cabinet last year.

Now Ms. Brnabic has even less chance of fulfilling her wish. Serbian MPs approved her appointment as Prime Minister Thursday evening, placing the conservative Balkan state in a small group of countries – most of them liberal and Western European – with openly gay leaders.

Her nomination had aroused admiration among pro-Western commentators in Serbia, both for her reform-oriented policies and for her personal profile. It “strengthens the country’s strategic orientation towards the European Union,” said Bosko Jaksic, commentator for the Belgrade daily Politika.

But it also raised eyebrows – both because of the EU candidate country’s mixed record on LGBT rights and because of Ms. Brnabic’s political inexperience. Observers wonder how much autonomy she will enjoy and whether her promotion hides a power consolidation by President Aleksandar Vucic, the former prime minister who was elected president in a landslide vote in April.

In a region of young democracies where nationalist rulers have steadily increased their power over political institutions, skeptics believe that appointments like Mrs Brnabic’s are the illusion of political change while powerful party leaders retain ultimate control.

Serbia is a largely Orthodox Christian country, where activists for the rights of homosexuals complain about deep-seated homophobia: the authorities only recently allowed gay marches in Belgrade after a three-year absence.

“It would be a big mistake to believe that this would make Serbia a kind of leader in the field of human rights or. . . LGBT rights, ”said Stefan Sparavalo of Da Se Zna, a Belgrade-based LGBT group.

Ms. Brnabic’s rise to notoriety was quick. After years of working on renewable energies and USAID-funded projects, she was appointed Minister of Government Administration just a year ago. Although she had never held an elected office, she was quickly praised for modernizing the Serbian bureaucracy.

But she has no party affiliation and analysts say she needs close collaboration with her political patron, Vucic. Although the Serbian Constitution does not specifically provide for such a role for the president, Vucic is expected to remain the de facto leader.

The sweeping election of Mr. Vucic cemented his position as the dominant force in Serbian politics. It also strengthened its role as the leader that Western partners rely on to guarantee stability in the Balkans, despite its concerns about its near-monopoly in decision-making and its close ties with Moscow.

Almost all of Mrs Brnabic’s fellow ministers are leftovers from the previous cabinet, including several prominent Kremlin-friendly figures, which underscores the continuity with Mr Vucic’s government. As Mrs Brnabic herself admits, she will consult closely with Mr Vucic on the most important issues: “After all, it is he who has given the government the direction,” she told Serbian television.

She will also share some duties with Deputy Prime Minister Ivica Dacic – a pro-Russian political veteran who in recent years has loudly criticized the EU’s efforts to promote LGBT rights. He will lead “essentially the political part” of the government, said Vucic. Ms. Brnabic “was nominated by Vucic and was never elected to office, so she will suffer from a lack of legitimacy within Vucic’s own coalition,” said Loïc Trégourès, Balkan specialist at the University of Lille. “She owes Vucic in a way, so it’s hard to expect real autonomy from her outside of her specific area of ​​responsibility.”

Andrius Tursa of Teneo Intelligence says the appointment of Ms. Brnabic does not herald a change, but highlights how Mr. Vucic “has created an unprecedented concentration of power since the rule of Slobodan Milosevic in the 1990s”.

“This presidency already existed under [former president Boris] Tadic. It’s not new, but under Vucic, given his rather authoritarian rule, it will likely be pushed further, ”said Trégourès.

Doubts aside, Mr Sparavalo – the LGBT activist – remains optimistic. “Pink-washing or not, if normal Serbs see a woman and a lesbian at the top in the national interest, it could really call their perception into question,” he says.