Serbia will all the time stand for peace and dialogue 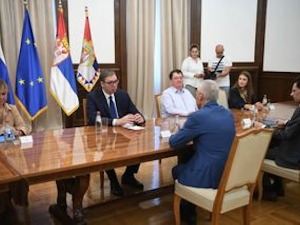 Today, President Aleksandar Vučić received the Ambassador of the Russian Federation, Aleksandar Bocan-Kharchenko, with whom he discussed the current situation in the region, especially after the tensions caused by the irresponsible, unilateral actions of Pristina, which were aimed at limiting the freedom of movement of Serbs from Kosovo and Metohija, the Service announced for public relations of the President.

Vučić said that it is good that Prishtina, under the pressure of international representatives, gave up its original intention to provoke a conflict and lead the entire region into instability.

“Serbia will always stand for peace and dialogue, as the only way to resolve open issues,” said President Vučić.

Ambassador Bochan-Kharchenko reiterated the position of official Moscow that Pristina’s actions are irresponsible and that any possibility of escalation should be prevented.

The two interlocutors also discussed bilateral relations between the two countries, which are characterized as sincerely friendly, and joint projects, the implementation of which is ongoing or in preparation.