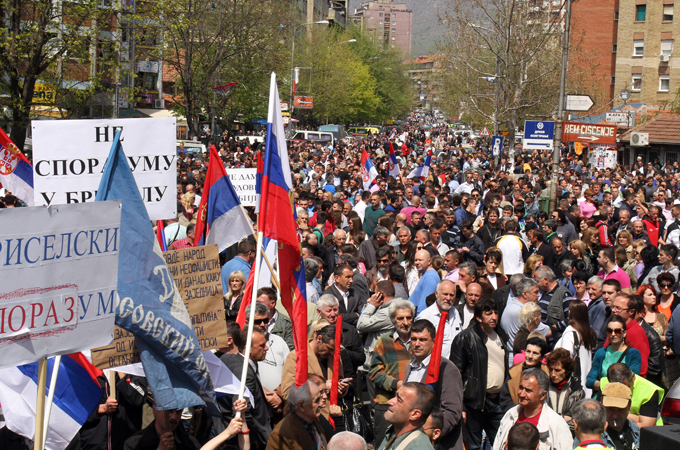 The historic deal will normalize tensions between Balkan rivals but has angered Kosovar Serbs who oppose EU integration.

Thousands of demonstrators marched against the Serbian government to protest an agreement to normalize relations with breakaway Kosovo.

Flag-waving Serbs shouted “treason, betrayal” as they gathered in the capital, Belgrade, hours after the government’s unanimous approval on Monday, said Al-Jazeeras Aljosa Milenkovic of Belgrade.

Our correspondent said that many of the protesters see the deal, which allegedly would cede 12 percent of Serbian territory to Kosovo, as a “betrayal” of Serbia and want it to be withdrawn.

Up to 10,000 other Serbian protesters also gathered in the divided city of Mitrovica in northern Kosovo against the agreement, which could end years of tensions and put Balkan rivals on the path to EU membership.

This agreement is a big step forward. If implemented, it can mark a historic turning point for the two countries, but also for the entire region.

Guido Westerwelle Foreign Minister of the Federal Republic of Germany,

The Prime Ministers of Serbia and Kosovo reached a provisional agreement in Brussels on Friday that would be transferred to the leading power of Kosovo of Albanian origin over the rebellious Kosovar Serbs. In return, the Serb minority would be given extensive autonomy within Kosovo.

It also called for the two sides not to hinder each other as they seek possible membership in the EU.

After Serbia’s approval, the EU Executive Commission recommended on Monday that the bloc begin accession negotiations with Belgrade.

The Commission stated in a report that “Serbia has taken very significant steps towards a visible and sustainable improvement in relations with Kosovo”.

“This agreement is a big step forward. It can mean a historic turning point for both countries, but also for the entire region, if it is implemented, ”said German Foreign Minister Guido Westerwelle at an EU meeting in Luxembourg.

Ban Ki-moon, UN Secretary-General, said he would “congratulate and praise” both sides for their “unwavering determination” and hope that the deal would “bring a better future and lasting stability to the region”.

Almost 100 countries – including the USA and 22 of the 27 EU states – have recognized Kosovo, which unilaterally declared its independence in 2008.

On Sunday, the parliament in the Kosovar capital Pristina also voted for a resolution in support of the agreement.

But it is not clear how the agreement is to be implemented on the ground in northern Kosovo, where Serbian hardliners vehemently reject any authority of the ethnic Albanians of Kosovo and regard the region as part of Serbia.

Kosovo is seen by nationalists as the medieval cradle of the Serbian state and the Serbian religion.

The influential Serbian Orthodox Church also condemned the agreement on Monday as a “clear surrender” of “our most important territory” and called on the country’s legislators to reject it.

The church said in a statement that the deal amounts to an “indirect and silent but still de facto recognition” of the Kosovo state.

Serbia gave up control of most of Kosovo in 1999 when NATO chased its troops out of the region after a three-month bombing raid.

The end of the division of Kosovo between the Albanian majority and the Serb-controlled north, which makes up around a fifth of the country, is an essential prerequisite for Serbia’s further progress on the way to EU membership.