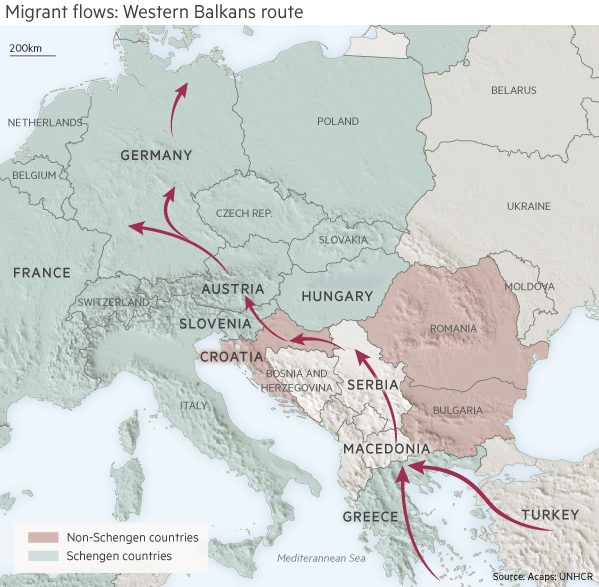 Although Serbia lies outside the EU’s borders, its prime minister says it is ready to do something that many EU neighbors oppose: to take a “quota” of refugees as part of a continent-wide solution to the migrant crisis.

Aleksandar Vucic, whose country lies astride the main migrant transit route, says European states should agree to accept up to 2 million real asylum seekers and then distribute them fairly.

“This is not for Europe,” the Serbian prime minister told the Financial Times in London this week. Such a number corresponds to less than half a percent of the EU population. “It’s not a big deal. It can even create new economic value.”

At the same time, Mr Vucic said the EU should do more to help improve conditions in countries around conflict-ridden Middle Eastern countries and strengthen their borders. Otherwise, Europe risks being overwhelmed by migrants even further away – and is already facing an imminent upswing with the arrival of spring weather, he warned.

Why should anyone in Sudan suffer. . . if they can easily reach Paris or London?

“Every single man in the world has or shares a smartphone and they know that there is a better life in the UK, France or Germany than in Morocco, Afghanistan, Syria or Iraq,” said Vucic. “You will have sub-Saharan countries very soon. Why should anyone in Sudan suffer. . . if you can easily reach Paris or London? “

But while such a continent-wide solution would have been possible earlier, too many states and politicians had chosen a “xenophobic” response instead. It might be too late now, warned Mr. Vucic.

Such words may seem rich from a man with a nationalist past during the post-Yugoslav wars. He was Minister of Information under the strong Yugoslav man Slobodan Milosevic and a former employee of Vojislav Seselj, who is currently awaiting a war crimes verdict in The Hague.

But Mr Vucic, an intense, soft-speaking figure with a touch of biting humor, has reinvented himself as a pro-European and led Serbia’s application for EU membership as Deputy Prime Minister and – since 2014 – Prime Minister. He has admitted previous “mistakes” and said that his personal journey is one that many Serbs can relate to.

After the war delayed its post-communist transition, Serbia is still struggling to build a modern, competitive economy, although it looks more stable than neighbors like Bosnia-Herzegovina and Macedonia. Sluggish growth of 0.8 percent returned last year after three years of negative growth over the past six years; Unemployment has fallen from a high of 25 percent but is still 17 percent.

Opponents have criticized the upcoming election, scheduled by Mr Vucic two years earlier – Serbia’s third in four years – as a cynical move to capitalize on its current popularity as his progressive party already holds a parliamentary majority. You claim that Mr Vucic acted against the opposition and freedom of the media.

Mr Vucic rejects such allegations as unfounded and insists that he seek a new mandate to complete structural reforms and EU accession negotiations by 2020. An election will also bring Serbian politics back to reform priorities after a distracting debate about changing countries, closer to Western institutions or Russia.

“I wanted to cut [through] all these topics and say, ‘OK, now is your chance to form a government that the Serbian people would like to see,’ ”he says. “And I am going with my program, which should finish our EU homework before 2020. Then it is up to the EU countries whether they accept us or not. “

This timetable is ambitious but, stressed Mr Vucic, achievable. Serbian EU membership would be a big step towards consolidating peace and democracy in the Balkans after Croatia joined in 2013 and Bosnia-Herzegovina officially applied for membership this month.

Serbia was criticized by the EU after receiving Russian President Vladimir Putin in 2014. Vucic says it is natural for an Orthodox Slavic country to have a “traditionally good relationship” with Moscow, but says the country’s geopolitical direction has been determined.

“We have a very clear policy. Our strategic goal is to be part of the European Union. I say that everywhere. . . even in Russia, ”he says.

How did Moscow react? “You didn’t say anything. I’m not saying that they cheered. “

In contrast to other EU candidate countries, which all joined NATO first, Serbia intends to maintain military neutrality. Vucic says the priorities are to downsize the public sector, reform state-owned enterprises, encourage investment and entrepreneurship.

The image of the EU has been damaged by the Greek debt crisis and its stumbling response to the migrant problem, admits Vucic, and sees the irony in Belgrade of joining while one of the bloc’s largest members – Britain – votes to leave.

“[Many Serbs] say that the EU may not be the best place in the world anymore, ”he says. “But I think the kind of society we want to belong to is something very valuable to us. We’ll continue with that. “