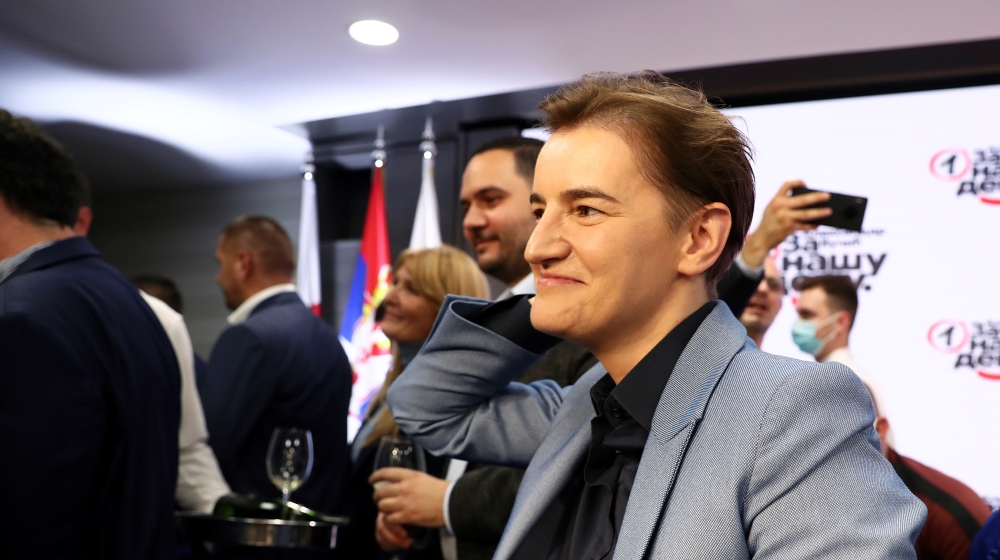 The residents of Serbia’s Sandzak have sounded the alarm about the number of coronavirus patients in the southwest The region’s hospitals are suffering from rising death tolls and are calling for urgent help from the authorities.

Local media and social media users posted videos and photos online last month showing patients in downtown Novi Pazar lying on blankets on the floor of a hospital due to overcrowding.

In the past few weeks, medical staff and patients in the cities of Novi Pazar, Sjenica and Tutin have reported a shortage of necessary equipment and staff.

On Saturday, a letter from Dr. Mersada Hadzifejzovic, head of the internal medicine department of the health center in Sjenica, in which she called on the Serbian health minister to send adequate help immediately.

“If you don’t react quickly and send professional medical help, there will be an apocalypse in Sjenica … HELP, PLEASE !!” Hadzifejzovic wrote.

In the absence of infectologists, pulmonologists, or other relevant experts, her department’s COVID-19 patients were treated by general practitioners, of whom there were very few, she wrote.

The doctor warned the entire hospital of the risk of infection as the COVID-19 unit was not physically separated from the non-COVID-19 department and she and her staff were already infected.

“There is no respirator in the hospital or central oxygen,” wrote Hadzifejzovic. “Everyday patients die … the situation is extremely alarming !!!!”

By June 23, the director of the Novi Pazar General Hospital, Meho Mahmutovic, informed the local media that 60 medical workers – 20 doctors and about 40 nurses – were infected with the coronavirus.

The following day, Jasmina Curic, President of the Serbian National Council of Bosniak, asked for help in a letter to Turkish President Recep Tayyip Erdogan.

According to data released on Monday by the Novi Pazar Institute of Public Health, 645 people have been infected with the coronavirus in Novi Pazar, a city of 71,000.

Locals have claimed that the death toll from coronavirus is significantly higher than official statistics from the Serbian Ministry of Health.

According to media reports citing unofficial information from health institutions and statements from doctors and patients on social media, 11 people died of the coronavirus in a single day on June 27 in Novi Pazar, while official data from the Ministry of Health showed only three deaths for the same day.

“I believe there isn’t a family in Novi Pazar who doesn’t have a family member who isn’t sick or doesn’t have coronavirus symptoms,” Senad Konicanin, a 44-year-old Novi Pazar resident, told Al Jazeera.

He said his mother caught the coronavirus a month ago and was taken to a hospital in Kragujevac 120 km away because the hospital in Novi Pazar was not well equipped.

“My mother is home now and she is recovering well, but a big problem for us in the city is that 10-15 people die every day in cities like Tutin and Sjenica, all because of a lack of equipment and medical staff. ” Konicanin said.

On June 29, two men from Sjenica, aged 49 and 69, were suffocated after a hospital in Uzice, 100 km from Sandzak, refused to treat them despite a serious illness. They were taken to Uzice by ambulance because doctors from their local health center could not help them.

Even so, the authorities insisted that everything was under control.

Last week, Serbian Health Minister Zlatibor Loncar said it was “absolutely wrong” that 12 people had died from the coronavirus in the past 24 hours.

“As Minister of Health, it is my duty to inform you of the actual situation and to take responsibility for it. There is enough equipment, materials and medicines, ”Loncar told reporters.

But the locals are not convinced.

On July 2, Mevlud Dudic, the head of the Islamic Community of Serbia, told local news outlets that in the past 10 days they had conducted funerals for 114 people in Novi Pazar and Tutin, a smaller town of around 31,000 people.

“It’s a devastating number of deaths compared to the pre-coronavirus pandemic,” he said.

Last month, the Balkan Investigative Reporting Network (BIRN) also reported that the death toll was much higher than the official figure.

“Between March 19 and June 1, 632 patients died from the coronavirus – 388 more than the officially announced number for that period, which was 244,” BIRN reported.

The Ministry of health did not respond to Al Jazeera’s request for comment.

After Loncar and Serbian Prime Minister Ana Brnabic reinstated the state of emergency, they visited a hospital in Novi Pazar last week. They were booed by protesters and medical staff turned their backs on the two officers during their press conference.

In response to growing outrage over the worsening situation, Brnabic denied allegations that there was no personal protective equipment (PPE) or medication in the area, saying the situation should not be used for “politicization”.

Brnabic denied the allegations that there was no PPE or medication in Sandzak [File: Marko Djurica/Reuters]

Serbian President Aleksandar Vucic called the allegations “lies” and said last week that he would not allow relations between Serbs and Bosniaks to be ruined in Novi Pazar – a Bosniak Muslim majority city – where “national peace and the extremists Destroying stability “.

Safeta Bisevac, a journalist for the Belgrade-based daily Danas, told Al Jazeera that it was the government that had politicized the coronavirus situation.

“Novi Pazarians protested and booed the Prime Minister for being mad and angry with the government for many reasons. The health system did not respond responsibly to the alarming increase in patient numbers, there were no tests, patients lay on the floor in hallways, authorities hid statistics on the number of infected people and the death toll, ”said Bisevac.

“Since [Novi Pazar] has a Bosniak [Muslim] The President mentioned extremists in the majority. The coronavirus has nothing to do with ethnicity and religion. I think the government is abusing the multi-ethnic and multi-denominational structure of Sandzak, ”said Bisevac.

“In Sandzak there are politicians who sometimes make unacceptably harsh nationalist statements, but in Sandzak there is no extremism or separatism. People just want better treatment conditions. “

Meanwhile, thousands of dollars were quickly raised for medical care in Sandzak, including a large donation from the diaspora.

Last month, two young women from Novi Pazar managed to raise 36,000 euros (approx. 40,600 US dollars) in donations from local residents within 24 hours to purchase 50 oxygen regulators and other devices for local hospitals.

Deliveries from Turkey arrived in Sandzak on Saturday, including 100,000 surgical masks, 30,000 epidemiological masks and 10,000 liters (2,642 gallons) of disinfectants, a mobile X-ray machine and other devices.

The government sent a team of doctors last week to strengthen the hospital in Novi Pazar.

The situation has improved but is still worrying, according to Rade Panic, President of the Union of Doctors and Pharmacists of Serbia.

He told Al Jazeera that the government acted irresponsibly in the run-up to the June 21 general election.

The lockdown measures were lifted and sporting events with up to 20,000 spectators were held at a soccer game in Belgrade, which has also become a coronavirus hotspot. 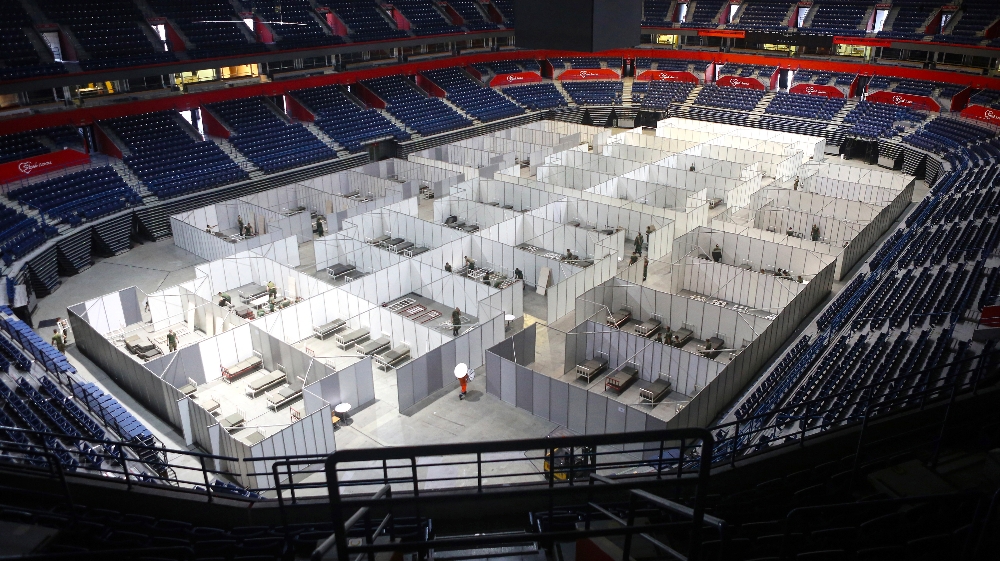 Beds are being set up again in the Belgrade Arena after the makeshift coronavirus field hospital closed two months ago as the hospitals have reached their capacities.

“Some members of the crisis team had warned before the elections that the situation was not favorable, that some measures should be implemented and things should be done differently,” said Panic.

“Everything was done so that the elections could take place here [detrimentally] relaxed immediately. “

“The colleagues are under pressure and threaten to be fired if they say something. In addition to all of the difficulties they face in treating and caring for patients, they avoid openly and publicly disclosing information, ”Panic said. “The media are in darkness over Serbia.”

To address the shortage of medical staff, neighboring Bosnia had offered to send a medical team to Sandzak to help in hospitals, but Serbia turned down the offer last week, saying it was in control, which dismay locals .

Three Bosniak citizens of Serbia who were working as doctors in Germany also sent a request to the Serbian government on June 30 to volunteer for the hospital in Novi Pazar. They found there was a lack of medical staff. according to one of the doctors.

Even if Sandzak is given the necessary equipment, Panic believes that the lack of medical personnel will still be Serbia’s biggest problem.

“It doesn’t matter how many ventilators we have. If there is no one to serve them, they are utterly useless, ”he said.