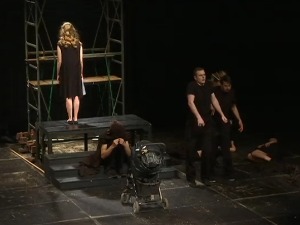 Professor Marija Milenković’s class, in which the youngest graduated actors are in Serbia, chose Bertolt Brecht for their maturity exam.

With the play about the struggle for a nobler society and for freedom of spirit, with Brecht’s “Caucasian Circle of Chalk”, they rounded off one, their own circle.

The play was also shown at student festivals in Romania, Northern Macedonia and Russia.

“In the selection of as many as nine of the best, Russian schools, prestigious schools from Poland, the Czech Republic, China, we managed to win the Grand Prix,” says actor Vukasin Jovanovic.

Jovanovic hopes that with a diploma in hand, the whole class will have the opportunity to show their quality.

Jana Ivanović believes that graduation was one of the turning points in their lives.

“So far we have been tucked away in college, we have had our responsibilities and that little world of support. Then we are now thrown into a world that is often cruel, especially at the beginning for young artists and people, but that challenge is beautiful and we look forward to it.” adds Ivanovic.

Bojana Stojković says that she feels confused. However, as he points out, there will be no winter with value.

Dragan Petrović notes that whenever he thinks of acting, art, theater, he always somehow says one word and emotion, and that is love.

And many theater fans remember, risky, and it will turn out to be the right move of the National Theater to stage “Tamed Goropad” in 1993, in which fourth-year acting students also played.

Then the current stars stepped on the stage. They were some of the students from the famous class of Professor Vladimir Jevtović, who marked, and still does, the Serbian theater, film and television.