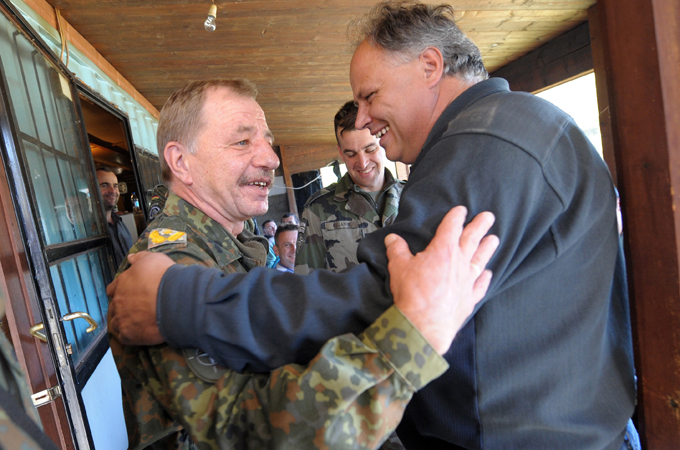 Ethnic Serbs in northern Kosovo have resisted NATO demands to remove roadblocks they erected almost three months ago to prevent the ethnic Albanian leadership from expanding their control over the predominantly Serb-populated part of Kosovo.

The Serbs have called for the use of troops and police from Serbia, and a meeting convened for Wednesday to resolve the crisis ended in failure, said Aljosa Milenkovic of Al Jazeera, who reported from Mitrovica in northern Kosovo.

The stalemate comes more than a decade after Serb forces were driven from Kosovo by NATO bombs.

The barricades were erected in July by Kosovar Serbs – who do not recognize Kosovo’s declaration of independence from Serbia in 2008 – and stand at two controversial border points with Serbia.

Clashes broke out after earlier attempts by the NATO peacekeeping force (KFOR), which had patrolled Kosovo and assumed a UN administration since the Serb forces withdrew in 1999. In 2008 it was replaced by a European Union Mission (EULEX).

Al Jazeera’s Milenkovic said the meeting between KFOR and the Serbs had yielded no results and that the KFOR commander had “apparently left the negotiating table not satisfied with the offer that the Serbs have put on the table”.

He said the Serbs had offered KFOR full freedom of movement in northern Kosovo without lifting the roadblocks.

A statement after a meeting of local Serbian leaders said: “Serbia and the UN Security Council should facilitate the return of parts of the (Serbian) army and police and their deployment in northern Kosovo.”

KFOR has not yet commented, but its German commander, General Erhard Drews, previously said he was disappointed with the defiance of the Kosovar Serbs.

He said the peacekeepers would remove the roadblocks themselves unless the Serbs changed their mind.

Serbia is still effectively governing Serb-dominated northern Kosovo, but is under pressure to help resolve the impasse after the European Commission made future EU accession talks conditional on its cooperation with the Kosovar government.

Local Serb leaders in Zubin Potok, about 100 km north of Pristina and near one of the intersections, said the roads would remain closed but agreed to speak to KFOR about their supply convoys being able to reach the peaches deployed there.

However, they later accused KFOR of derailing the negotiations by insisting that EULEX vehicles should also be allowed to cross the border. The Serbs fear that EULEX will escort customs officials from Pristina to take over the border crossings.

“KFOR wants to solve this by force and will be responsible for new developments,” said Radenko Nedeljkovic, the head of Mitrovica district.

The Serbs have also urged Belgrade to end its European Union-sponsored talks with the Kosovar government in Pristina on practical issues such as the flow of people and goods, property issues, energy supplies and travel documents.

Serbia lost control of Kosovo in 1999 after 78 days of NATO bombing to stop the killing and displacement of Albanian civilians by Serb forces in a two-year counterinsurgency war.

More than 80 countries, including the United States and most of the European Union, have recognized the new country.