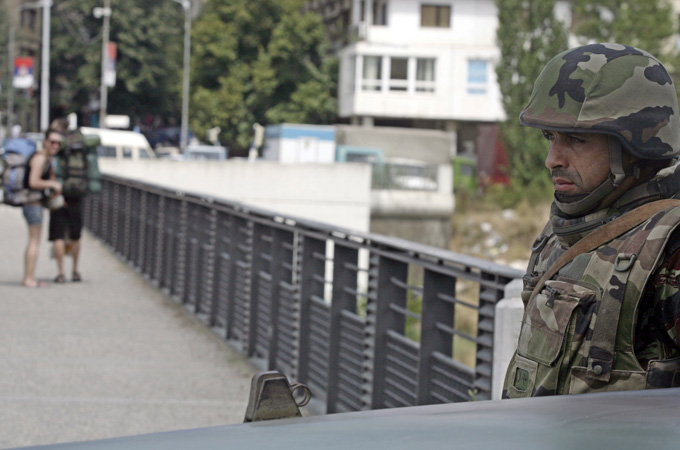 The incident follows the seizure of a Serb-occupied border crossing post in the northern region by Kosovar police forces.

Ethnic Serbs set fire to a border crossing in northern Kosovo after the Kosovar government said it had regained control of the post and a second post, officials said.

Serbian State Secretary for Kosovo Oliver Ivanovic said no one was injured in Wednesday’s incident, but raised concerns about further violence.

“An act of violence creates more violence. I’m afraid we’re getting caught in a spiral of violence, ”he told Reuters.

Armed ethnic Serbs also shot at NATO peacekeepers in Kosovo in the ethnic-Serbian-dominated north of the country on Wednesday.

“The situation at the Jarinje customs post has deteriorated and it has been confirmed that arson was committed against this position,” said a statement by the NATO peacekeeping mission in Kosovo (KFOR).

“There are also confirmed reports of shooting at nearby KFOR personnel,” the statement said.

The NATO statement did not say whether someone was injured in the attack or whether KFOR troops returned fire, but reinforcements had been sent to the border.

On Monday, armed police forces from Kosovo marched into the Serbs-led north to station troops in a region taking orders from Serbia, the Associated Press said.

In an exchange of fire between police and local Serbs against Kosovo’s efforts to take control of its border guards, a Kosovar police officer was shot in the head and died on Tuesday, with four others injured.

The same border post was burned down by local Serbs in 2008 after Kosovo declared independence.

The European Union had previously condemned the measures taken by Kosovo to control the two controversial border crossings with Serbia.

The Kosovar Prime Minister Hashim Thaci justified the operation on Tuesday by saying that it was a “concrete step towards establishing the rule of law” in the north.

He said cooperation with the international community is important, but “the constitution and sovereignty of my country are sacred to me and my compatriots and go beyond any partnership or loyalty”.

At a press conference, however, Maja Kocijancic, a spokeswoman for the EU Commission, described Kosovo’s unilateral approach in the region as “not helpful”.

“It was not done in consultation with the European Union or the international community and we do not approve of it,” she said.

Although Kosovo separated from Serbia in 2008, Serbia does not recognize its independence.

In order to undermine Kosovo’s claim to sovereignty, Serbia has stationed its troops in the northern region and forced a boycott of goods from Kosovo.

Kosovo wants to maintain control of the north and enforce a similar ban on Serbian goods.