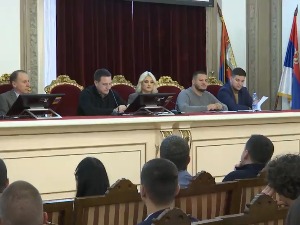 The priorities of the Student Conference of the University of Serbia in the new convocation will be teaching and student standards.

From what has been done, they first of all single out the Law on Student Organizations, for which they have been waiting for 15 years.

“Implementation is not so easy. In principle, in this term we will try to establish it even more thoroughly in our practice,” says Rafit Alić, president of the Student Parliament of the State University in Novi Pazar.

“We will try to contribute as much as possible to the student standard and to fix everything that we missed this year and to emphasize the best students throughout Serbia,” said Rade Sedlan, president of the Student Parliament of the University of Novi Sad.

“I think we’ve made a big step because we’ve started to put students a little more at the center of studying,” says Sara Djapa, president of the Student Parliament of Singidunum University.

The University of Belgrade expects students to play a proactive role.

“It is an opportunity for them to express their ideas, to express their visions, to express their expectations, on various topics. I have to say that so far we have had exceptional cooperation with the previous convocation of SKONUS, that the students have shown a really great degree of responsibility”, says prof. Vladan Đokić, president of KONUS and rector of the University of Belgrade.

In the past two days, the issue of student loans has been topical.

“The level of student loans that existed in the previous year will also exist in 2023. It is primarily about the fact that we managed to increase the value of both scholarships and loans, that the budget was practically adopted after the publication of the so-called preliminary list. So, now it has been prolonged, and in this regard, students have reason to feel any apprehension,” says Branko Ružić, Minister of Education.