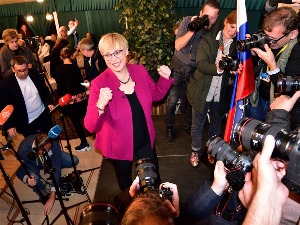 At 7 p.m., more than 3,000 polling stations across Slovenia were closed voters voted in the second round of the presidential elections between candidates Anžet Logar and Nataša Pirc Musar.

The final results will be known by November 29, and the newly elected president will take office on December 23, when the current head of state Borut Pahor’s term expires.

Ange Logar said that the campaign was difficult. However, he already congratulated his opponent, Natascha Pirc Musar.

“Today is the end of a long journey. The elections are a celebration of democracy and the voters have decided today. Nataša Pirc Musar will become the first president and I sincerely congratulate her on her victory. I believe she will keep her word and be the president of all of us. It is undeniable that she worked hard during the pre-election campaign. Her campaign was not easy and she was already written off during the campaign. But she persevered, just like me,” said Logar.

The President of Slovenia, Borut Pahor, also congratulated the newly elected President Natasa Pirc Musar in a telephone conversation, wished her success in her work and invited her to the Presidential Palace on Tuesday. Pahor also congratulated Anže Logar, especially for his unifying address to the people after the elections.

Prime Minister Robert Golob also sent his congratulations. “I congratulate you on your election, which is proof that the citizens want to live in a country where the fundamental elements of democracy will be respected: human rights, the rule of law, independent media, freedom and dialogue that they will respect. I am confident in our good cooperation in dealing with common challenges of the future and the strengthening of an open, inclusive society that prioritizes solidarity and integration, as well as joint efforts to develop the country for the benefit of all”.