Sooner or later, the suspicious property of public officers might be checked within the nations of the area as effectively 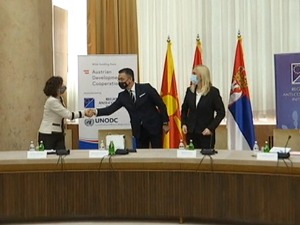 This means that after the ratification of this agreement in the signatory states, the competent authorities of one state will, at the request of another state, submit data on possible property or business of public officials in that country who are suspected of committing a crime or any kind of corruption.

This is the first agreement of this kind in the world, which was signed in the Palace of Serbia.

On that occasion, the Minister of Justice pointed out that with this agreement, Serbia has made a step forward in the fight against corruption, which is also the strategic goal of the Government of Serbia.

“We will remain steadfast in that fight, but for that we need the support of colleagues from the region and Europe, because corruption has no nationality and knows no borders,” Popovic emphasized.

The Montenegrin Minister emphasized that in addition to technical cooperation, this agreement also testifies to the wider cooperation of the three signatory states, and he hopes that other states from the region will sign it, with the wish that it also become pan-European.

“It is important that an effective step was achieved today in the fight against corruption, in this case by exchanging data, because the law is often circumvented by transferring property to other countries, especially to the countries of the region,” Leposavic said.

The head of the RAI secretariat, Vladan Joksimović, expressed satisfaction that the RAI initiative was finalized by the first agreement and that this issue was agreed at both the technical and political level.

“The champions of this process are Serbia, Montenegro and Northern Macedonia, which joined the agreement today. I hope that other countries in the region will join them soon, such as Bosnia and Herzegovina and Albania, and then many European countries,” Joksimovic said.

KEDS invests in the tourist area of ​​Brezovica – Latest News