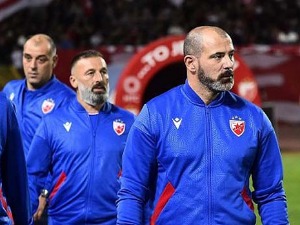 Football players of Red Star they convincingly outplayed Voždovac with 4:0 in the match of the sixth round of the Serbian Super League, they continued their successful streak in the new season, but their strategist called for caution and pointed out that there is no relaxation despite good games and results.

“We shouldn’t get used to this, because it won’t always be a high score. For me, sometimes a good and concrete game, with organization, is more important than the height of the score, because both 1:0 and 4:0 are three points in any case.” , said the coach of the Red Star players, Dejan Stanković.

“Congratulations to the players, when you play every three days there can be fatigue, but we were preparing for it. You could see in the first 20 minutes that it was quite good, and when someone like the Voždovac team has freshness, it comes with it to outplay, but we remained compact. We missed a few chances that could have “solved” the game, but sometimes I prefer to be a group, endure, stay organized and wait for the moment to punish the opponent’s mistakes. Now recovery is important to me and that let’s get ready for what awaits us in the next nine days,” said Stanković.

Zvezda’s coach added that he was particularly happy that Milan Rodić, Mirko Ivanić and Aleksandar Pešić, who did not play against Pjunik in Yerevan, were on the field.

“They are a serious support and a pillar of our game. I am very glad that Pešić played 65 minutes, and Rodić and Ivanić played the whole game. I am happy about that, there were a lot of good things and I can’t blame the players for anything. I know where the problem was , football is a living thing, it’s not “one plus one two”, it has to be done, but it’s important to me that we prepare one game at a time. The goal is clear, and that’s the only way we can be focused on what comes next”.

The Zvezda host Maccabi in Haifa on Wednesday at 9 p.m., and then there will be a rematch on August 23 at the Maracana and the decision of who will go to the Champions League.

“We were preparing for that, we passed and fulfilled the goal, which is the direct Europa League through the Champions League. I am optimistic before the doubleheader, it is not an impossible mission, in some segments we have to be more focused and with greater concentration. We know it will be hell in Haifa as far as the atmosphere is concerned, but I believe that it will be twice as “hot” here at the Maracana,” concluded Stanković.