Stanojevic is aware of how troublesome it’s in Ivanjica, Bondzulic hopes to interrupt the unhealthy custom 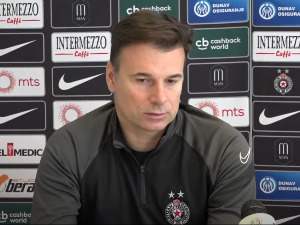 The black and whites will play against Javor in Ivanjica on Wednesday at 1 p.m.

“Tomorrow we will have an unpleasant visit to Ivanjica. Everyone is healthy except for Aleksandar MIljković, who is feeling the consequences of the last game against Pazar. He will not be in the team, the others are ready,” Stanojević said at a video conference for the media.

Partizan is in a series of nine victories in the Super League, while Javor has not lost since the continuation of the spring part of the season.

The coach of the football players of Javor from Ivanjica, Igor Bondžulić, says that his team wants to break the unpleasant tradition against Partizan because they do not know about the victory in the championship matches against the black and whites.

“I don’t have to talk much about the next opponent and the bad tradition we have against Partizan. I think that everyone in the club has the opportunity to show that we are worth and have the power to oppose such a quality opponent, so I hope we can continue with positive results. “We started doing our best. We have to do our best, play without too much respect and try to achieve what we planned,” Bondzulic told the club’s website.

The Javor Partizan team welcomes after four points won in the previous two games, defender Filip Pavišić emphasizes the good atmosphere in the locker room and also hopes for a good game and the continuation of a good series.

“We started the half-season well. It is a pity that we did not take all three points from Krusevac, but we are also satisfied with the point. The atmosphere is great. We are preparing for Partizan, analyzing them. We must not show too much respect to them, even though they deserve it. a good series of results, “Pavisic said.