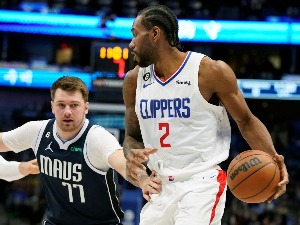 The Los Angeles Clippers scored a very important victory, with which they avoid the place from which they will have to go to the playoffs in the playoffs of the strongest world league.

The match in Dallas was open until the last quarter. The first quarter, which was characterized by mistakes and good defense, ended with a score of 22:20 in favor of the Clippers, which is very low by American standards. In the second half, both teams played better basketball, but thanks to a more aggressive game, the home team went into the break with a five-point lead.

The third quarter also passed in uncertain results. The Clippers managed to get out of this period with a tie and a slight psychological advantage before the decisive quarter. In the last part, calmer attacks, without excessive forcing of the shot for three points and perfection from the penalty line brought a much-needed victory to the visitors from California.

In the home team, as usual, Luka Doncic was the best with 29 points and 10 assists, Hardaway scored 22 and Dinwiddie 21 points.

The Miami Heat also achieved a turnaround in the second half and won over the NOLA team.

The visitors, led by Valanciunas and Murphy, got into the match better and led by 16 points at one point towards the end of the second quarter, but after that the advantage gradually decreased.

After halftime, Miami played better and in the third quarter, it was point for point in leadership changes on both sides, so that in the last quarter, Miami was constantly leading with a couple of baskets.

In the Heat team, Hiro scored 26 points, Adebayo and Butler scored 18 each, while the experienced Kyle Lauri contributed with 17.

Valanciunas stood out for the Pelicans with 14 points.