The defeat of Atlanta with the modest recreation of Bogdanović, Houston stunned Toronto 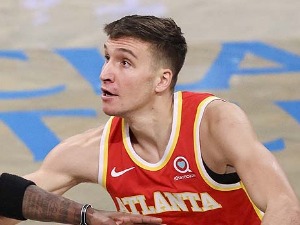 Atlanta entered the match well on the road at the Staples Center, and in the third quarter they took a convincing lead of as many as 22 points, but then the Clippers coach Tyrone Lou put the second team from the bench into the game.

It turns out that it was a key moment of the match, because the motivated second team managed to achieve the fourth tied victory in Los Angeles, consolidate the fourth position on the Western Conference table and inflict the first defeat on Atlanta after eight celebrations in the series.

The team was led by Luke Kenard and Terence Man with a great performance upon entering the game.

Luk Kenard spent only 18 and a half minutes in the game and did not miss a single shot. He scored four three-pointers for the guests, including one from half of the field, for a total of 20 points with seven rebounds and four assists.

He was followed by Terence Man, who achieved the second double-double performance in his career with 21 points and ten rebounds.

Tre Young was the most efficient in the away team with 28 points, and the Serbian national team player Bogdan Bogdanović was not the starter in the match that ended with 12 points with three rebounds and two assists.

Houston was convincing at home in the duel with Toronto with 117: 99, and they were led by John Wall, who was in the mood to play.

The Utah team convincingly beat Chicago on the road with 120: 95, and they were led by Donovan Mitchell and Rudi Gober.

Mitchell finished the match with 30 points scored with six rebounds and assists, and Gober scored 21 points but caught ten balls, and was especially efficient in the blocks, which he collected as many as nine, which is his personal record.

Milwaukee was the most efficient team of the evening and beat Indiana with 140: 113, led by Jrou Holliday with 28 points and 14 assists.

In the victory of Oklahoma over Minnesota with 112: 103, a young Serbian international Alexei Pokushevsky achieved a double double-digit effect.

On the road, he celebrated Sacramento over Cleveland 119: 105 and Nemanja Bjelica spent only nine minutes in the game with a modest performance.

Fjolla forgets that the whole world sees her, publishes ‘fiery’ videos from the bathtub