The European workforce with Jokic, Doncic and myself would simply get one of the best workforce in America 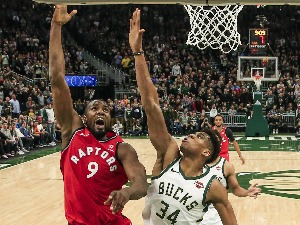 Serge Ibaka, who became famous as a member of Oklahoma and then Toronto, and who was considered one of the best wing centers in the world when he was at the peak of his career, has his own podcast in which he hosts the best NBA basketball players and prepares meals for them.

The dishes that Ibaka prepares are anything but ordinary, so the question posed in the name of the podcast, How hungry are you, is quite justified. Ibaka served his fellow basketball players: fish eyes, penis pizza, caterpillar gyros, grasshopper chips, sheep’s tongues, sheep’s eyes and snakes.

Janis talked about his interesting moments during his career, and first he started with the story of how he ran to the gym because he was late for a game.

“I sent all the money to my family, I only had a card with me and when I entered the taxi there was no option to pay by card. I had to get out and run to the hall, it was very cold. While I was running, I was noticed and recognized by a family, I asked them to drive me to the hall and they did.” Janis told with a laugh.

“When I retire I want to disappear completely to blend in with the environment like Tim Duncan. No one knows where Tim Duncan is. I’m not the face of the league, LeBron is still playing, there’s Steph, Durant, Embiid kills the way he plays, Jokic is consecutive MVP , and there is also the magical Luka,” Janis commented on his popularity.

Ibaka asked him to pick the best teams in America and Europe.

“Embid is in the center, Jokić is four, I’m the wing, let Fournier be the guard and Luka the point guard, the “crazy” team is very talented. For America: Steph, Klay, Durant, LeBron, Adebayo. They would definitely beat them, who will to protect us,” Janis smiled.